Fallen Stars - The Poetry of Dandelions

Scorned as a weed and resented by many gardeners for their invasive habit and deep taproots, almost impossible to eradicate from the well-trimmed, sensible garden, dandelions - whose leaves were once prized for their medicinal benefits - today are much-maligned, but in my opinion unjustly so, for the flowers that English poet John Clare (1793 - 1864) described as fallen stars in a sea of grass are beautiful and interesting, have a long, varied history - and have had a not inconsiderable impact on poetry. 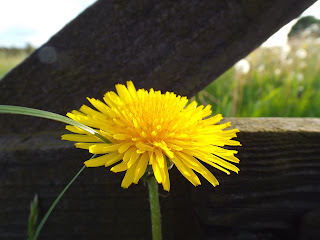 Forth from its sunny nook of shelter'd grass, states the great 19th Century American poet Walt Whitman, innocent, golden, calm as the dawn, / The spring's first dandelion shows its trustful face.
Indeed, throughout this spring I have been enchanted to lay eyes on the gradual blaze of dandelions - first emerging as the frosts of winter began to grudgingly recede, peppering the avenues and verges through a chilly March, braving the unexpected carpet of snow which descended on my valley in the bittersweet spring.  I saw them as the snow melted, and the hedgerows and grass banks gradually twinkled with red campion, buttercups and periwinkles.  I saw them popping up in gardens, delighting the bees, colonizing hillsides and illuminating woodlands, and sheathing rich green fields in fiery gowns of star-like gold.   As John Clare's poem records:

Tis May; and yet the March flower Dandelion
Is still in bloom among the emerald grass,
Shining like guineas with the sun's warm eye on--
We almost think they are gold as we pass 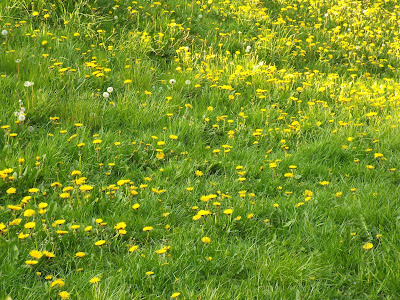 The plants we group under the banner of the dandelions are generally those which are found within the Taraxacum genus - part of the aster (Asteraceae) family, native to much of the Northern Hemisphere and naturalized through most of the world.  They are found often in medowes neere unto water ditches, explained Gerard in his 1597 Herbal, as also in gardens and high wayes much troden.  And it is precisely this habit of springing up in gardens which has gained the dandelion its tarnished reputation - while its frequency in almost all environments and ability to survive the seasons - Gerard (who drew attention to the culinary practises by which dandelion leaves might be cooked into a broth to help with urinary problems, fevers and sores, as well as helping with rest) also says that it will floure most times in the yeare, especially if the winter be not extreme cold - that obstructs the plant from enjoying a more favourable reputation for its beauty: How like a prodigal doth nature seem, / When thou, for all thy gold, so common art! exclaimed the American Romantic poet James Russell Lowell - and how right he was - for surely if this sparkling, attractive flower were less regularly glimpsed, it would revel in shimmer of a sought-after reputation.  If dandelions were seen unexpectedly, if they were brought to these shores from exotic climes or cultivated in extreme conditions, sold as rarities at specialist nurseries, then I feel certain they would be spoken of the way we speak of the Star of Jerusalem or rare herbs like the cloudberry or Snowdonia Hawkweed.  Why?  Because they are both highly distinctive, and startlingly pretty. 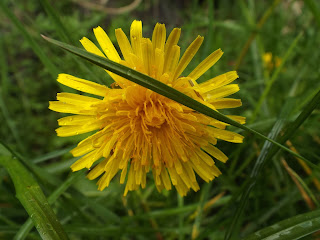 Although, as Gerard tells us, dandelions might weather out a mild winter, they are to most of us a sign of sunnier times, and seem to herald the coming of the spring as colourfully as daffodils.  The dandelion's seasonal salience is elegantly depicted by Emily Dickinson:

The tube uplifts a signal Bud
And then a shouting Flower, --
The Proclamation of the Suns
That sepulture is o'er. 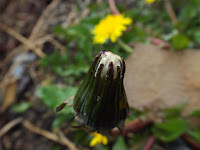 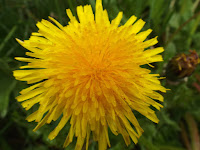 I would go so far as to say that dandelions are more lovely than daffodils - though no doubt William Wordsworth would disagree.  But stop for a moment and consider the spectacular nature of their appearance - like tiny explosions of glistening garnet, neon Catherine-wheels glowing in the grass, with all the delicious mischief of hopes refusing to be suppressed - and you will surely see that dandelions, far from being pesky or unpleasing to the eye, are plants to be admired. 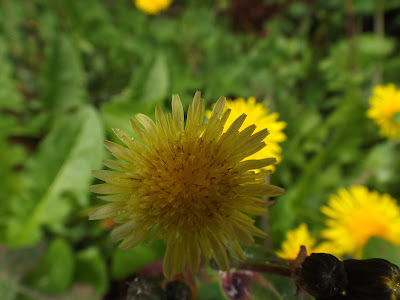 Dandelions, with their legendary roots and irrepressible habit, are as persistent as they are eye-catching, and despite the best attempts of their determined horticultural assailants, they are difficult to remove from any garden in which they manage to become established. As Culpeper wrote in 1653:

The root growing downwards exceeding deep, which being broken off within the ground, will yet shoot forth again, and will hardly be destroyed where it hath once taken root in the ground.

If the natural world is yet to withstand the unremitting assaults that humanity has waged upon it in the ways of pesticides, intensive agriculture, over-population, pollution, excessive destruction, "development" and the meat industry, it is surely to be plants like dandelions - who simply do not know when they are beaten and who refuse to give up their claims to the soils they embrace, which are most numerous among surviving species.

And, as we trudge through the embers of a world beset by problems, no doubt sometimes feeling something akin to an End-of-Days, we might glimpse something valedictory about the dandelion also.

Golden lads and lasses / must like chimney-sweepers come to dust writes Shakespeare in Cymbeline, a magical play in which a Classical Universality is distilled into the pastoral timelessness of a quintessentially English landscape.  We can visualize the dissolution of the dandelion in his withering "golden lads and lasses" just as acutely as in the more literal lines of Clare, who concludes his reflections on these fallen stars of flowers, deserving of so much more than the curt lack of appreciation with which they are habitually greeted by ungrateful gardeners, by observing how:

They shine in fields, or waste grounds near the town.
They closed like painter's brush when even was.
At length they turn to nothing else but down,
While the rude winds blow off each shadowy crown. 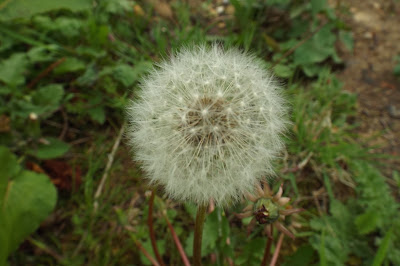 Yet even in the deathly pallor of this shadowy demise, the dandelion exudes a sylvan, melancholy beauty.  Take a look, close-up, at the minute magnificence of its silvery cloud of spherical seed-heads, like icy spiders' webs, slowly fragmenting as the frosty balls of seeds are dispersed by winds, drifting through warm air like calcite-coloured butterflies. 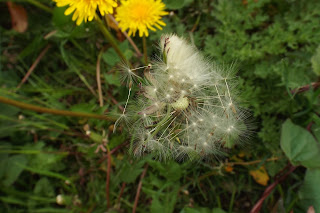 Watch as the seeds of tomorrow's glimmering flowers are wafted this way and that on a summer breeze, and hopefully you will see the long-suffering dandelion in a kindly light, delighting like John Clare in its starry splendour, and agreeing that far from being an unwelcome guest, this radiant flower is a glittering gem, to be treasured and admired. 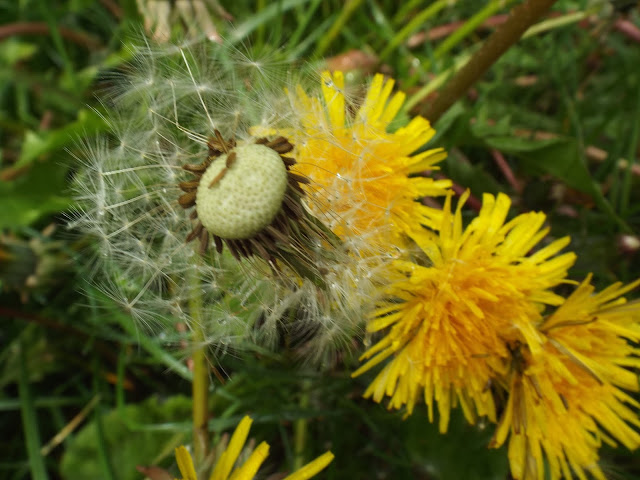 Posted by Caterpillar Poetry at 23:15 No comments: