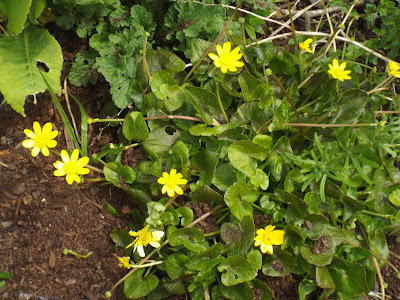 It was a lovely surprise to see the celandines I planted last year, re-emerge this spring to sprinkle the garden in their sunshine-coloured glow.  Like the delicate melodies of a fond-remembered song, their ochre notes have twinkled in a shower of light, as the land slowly brightens and the sandy, stony soil is gradually filled with flowers.
The celandines in question are the so-called "Lesser Celandines" (Ficaria verna) - wild growing perennials with glossy yellow petals.  The juices from F. verna's tuberous roots are rich in Vitamin C, and were said by Gerard to purgeth "the head of foul and filthy humours," the leaves have a nutty taste and are often used in salads - while the flowers themselves have drawn a variety of poetical responses from writers through the ages. 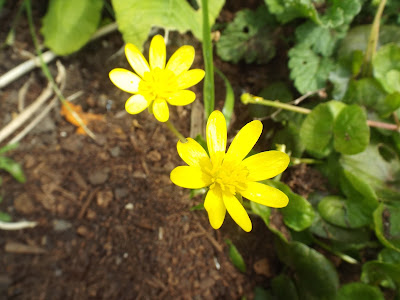 Modest, yet withal an Elf / Bold, and lavish of thyself  is how Wordsworth conjures up the character of the flower, and he went on to write three poems specifically in praise of Ficaria verna - proclaiming it his favourite flower, and declaring:

There is a flower, it is mine
'tis the little celandine

A century later his poems in honour of the lesser celandine were echoed in their admiring tone by Edward Thomas.  In his poem Celandine, Thomas paints a sadder picture than Wordsworth, remembering a deceased love, who found the celandines of February / Always before us all, and whose memory is recalled by his own sighting of the flowers:

Thinking of her had saddened me at first,
Until I saw the sun on the celandines lie
Redoubled, and she stood up like a flame,
A living thing, not what before I nursed,
The shadow I was growing to love almost,
The phantom, not the creature with bright eye
That I had thought never to see, once lost.

In stark yet tender stanzas, Thomas uses the image of the petals to depict  locks sweeping the mossy sod, the laughing "blossoms" of the celandines perfectly embodying the poet's lost love:

Her nature and name
Were like those flowers, and now immediately
For a short swift eternity back she came,
Beautiful, happy, simply as when she wore
Her brightest bloom among the winter hues
Of all the world 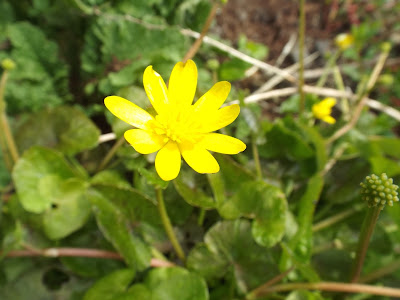 In Sons and Lovers, DH Lawrence also twins the celandine with young love, presenting the plant as a favourite of protagonist Paul Morel:

Going down the hedgeside with the girl, he noticed the celandines, scalloped splashes of gold, on the side of the ditch. "I like them' he said 'when their petals go flat back with the sunshine. They seem to be pressing themselves at the sun." And then the celandines ever after drew her with a little spell. 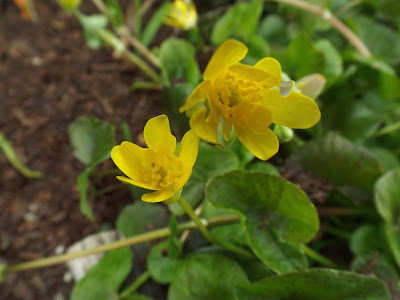 But the magic of the celandine has also shone its way into the realms of the fantastical. CS Lewis features the flower in one of the salient passages of The Lion, the Witch and the Wardrobe, as the forest floor becomes bejewelled by their unexpected splendour:

wonderful things happening. Coming suddenly round a corner into a glade of silver birch trees. Edmund saw the ground covered in all directions with little yellow flowers - celandines".

That Ficaria verna has found its glimmering way into a poetry and prose,  need come as no surprise. When we think of its rich sunny coloured petals, quilting woodland floors in a floriferous glow of buttercup-blonde, catching the light and gleaming like tiny topaz stars, its intricate receptacle enclosing a globular carpels and wavy, lemony stamens brimming with pollen, and the way the flower opens out on spring mornings to reveal a sun-like shape of brightness and warmth, it is not unsurprising that these pretty woodland wildflowers have enjoyed a presence in literature, and were so beloved of William Wordsworth that he arranged for their image to be carved onto his grave. 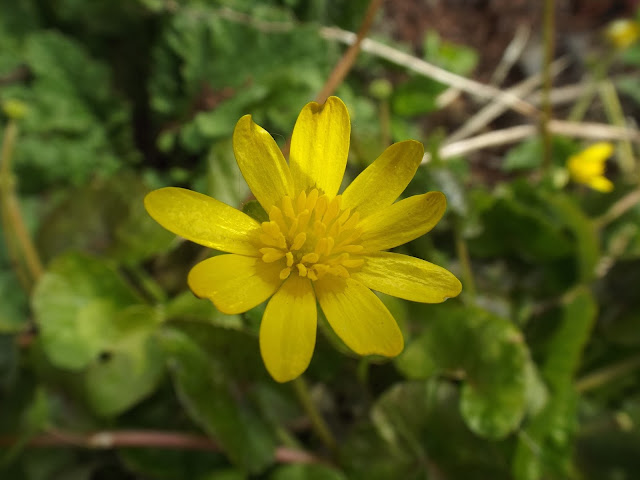 Posted by Caterpillar Poetry at 00:47