Celebrating the Sounds of the Irish Harp

At last October's Morley Arts Festival, I was joined by actor and writer Caroline Lamb for a performance of our poetry and drama event Exploring the Brontes, together with harpist Berni Byrne, who provided music on the Irish Harp.  Bernie has since joined us for several other ETB events, as well as introducing my recent UNESCO poetry event with exquisite music on the same beautiful instrument, and on listening further to her music on Berni's Soundcloud page (https://soundcloud.com/berni-byrne) I have grown increasingly interested in the harp, its history, and the majestic music it creates. 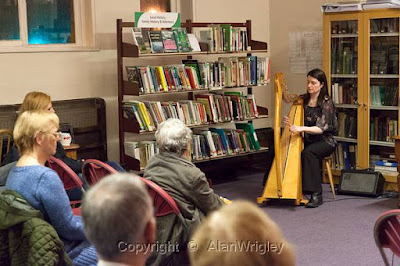 My association with Berni began, as most good artistic partnerships do, in an undertakers.

Having advertised the Bronte event back in the summer as featuring live music on a related theme, I neglected to ensure the certainty of one small component of that feature: the enlisting of an actual musician to play it.  I know many musicians, but nobody was free on the evening in question, and as the weeks and months peeled by, with no instrumentalist apparent, and drawing on my experiences of helping to run festivals and coordinate events, I became increasingly blase - insisting to any doubters that a musician would indeed be found.  Such was my external flippency - inside I had begun to accept the terrifying likelihood that I would have to renege on my announcement, and conduct the event sans musique.
It was only a few days before the scheduled event that, working one afternoon at Morley Library, I was informed by a colleague returning from her lunch hour that she had cut short her break in order to tell me about the harpist playing down the road at the funeral directors.  When I arrived at the premises, Berni was playing gently in the corner by the window, and as I stood and listened, surrounded by the quaintly beguiling funeral advertisements, I immediately knew that I simply had to recruit her for the performance. 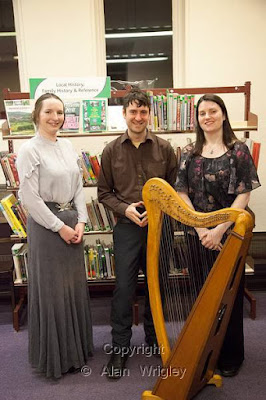 
Berni's performances on the harp that evening featured some wonderfully delicate and evocative Irish traditional music, including the elegiac Gort na Mona, the lyrical and impressionistic Roisin Dubh, sounding to me like a blissful blend of  Debussy and mediaeval folk, and the English piece The Rose.  Bernie concluded with a beautiful piece called Resting Chair, which followed my descriptions of the sad decline and death of Branwell Bronte, but earlier in her suite she had played the rousing Trumpet Voluntary, which became a standard of her set during the further performances she gave with Caroline and I - a piece which always makes me think of the principled and stoic Patrick Bronte ministering to his congregation at St Michael and All Angels, Haworth. 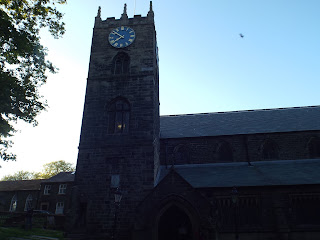 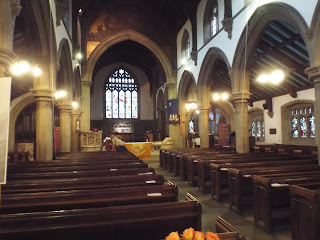 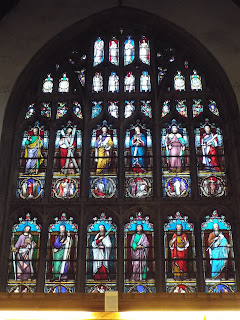 After the event, surviving the maelstrom of Leeds City Station with its hordes of yelling revelers, I was delighted to see three familiar faces along the side of a carriage:

All through my journey, as the train slid through darkened miles of industrial estates, cemeteries and rained-on rows of council flats, Berni's harp seemed to twine through my drowsy mind, hovering somewhere between a dreamy sleep and being tugged back awake by the coarse cries of fellow passengers.  As I gazed along the concrete fringes of Bradford, its tower blocks and abandoned mills, the long tongue of the railway tracks slurping through weedy waste-ground and past steep-banked quarries, the harp blended sweetly in my mind like a rich, hypnotic wine. We trundled into Halifax, and from there to Sowerby Bridge, nestling in the night like a nest of soft, dim light.  By the time I stepped onto the platform, the autumnal night had hardened into icy cold. Stars sliced  through the blackness like the beaks of silver birds, a mellow moon lighting my path along the canal bridge and alleyways towards home.  In my bag, were the three poems, or rather three parts of one combined poem, which I had written on the train in between my drifting in and out of sleep, reflecting the images and feelings evoked by Berni's music from the Irish Harp. 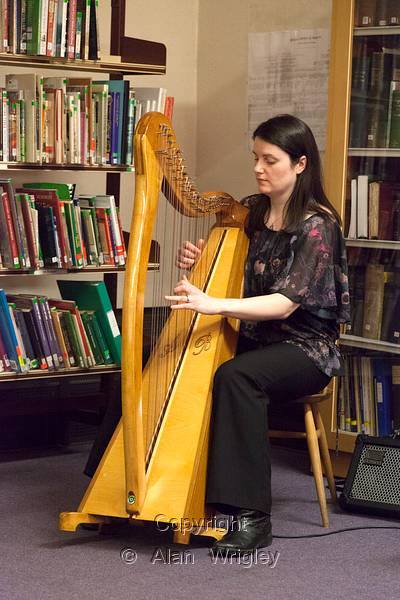 Posted by Caterpillar Poetry at 14:56