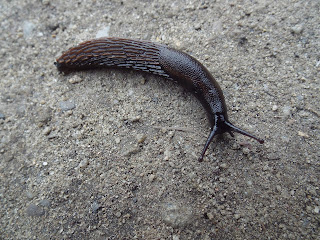 It is five years since I first set eyes on a Budapest Slug (Tandonia budapestensis), small as a pebble among the swampy hills of a misty Mixenden, above the reservoir.  In my essay, In Love with Slugs, I describe how:
As it slid along a lichened slab of rained-on stone, I watched its tar-black body constricting to reveal an open breathing pore, lending it a certain vulnerability. At the time, I marvelled that this may be the first and only time I laid eyes on such a scoop. How wrong I was! In the ensuing months and years, I have glimpsed a great deal of Budapest Slugs, often among rocky, terrain, and have come to regard them as a staple part of the Calder Valley landscape. Indeed, the area’s rich acidic soils are a boon for slugs and snails, and we are host to a bewildering variety of different species.
https://sites.google.com/site/ryburnramblings/lizard-point-to-dunnet-head-september-2006/in-love-with-slugs 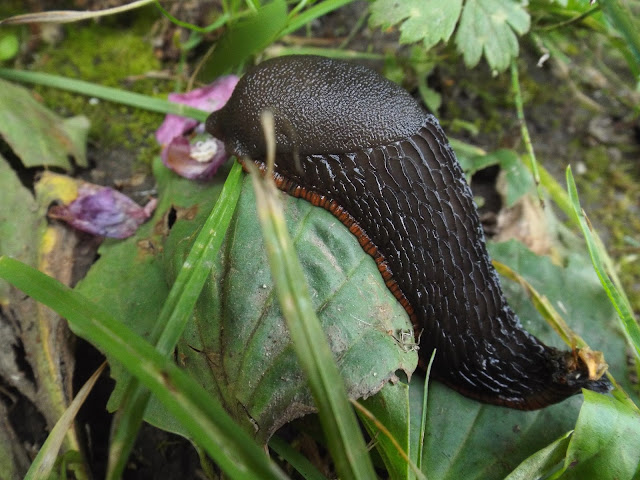 With my reputation as a "poet of slugs and snails" attached to me like a slug's endemic slime, I am delighted to reveal that the re-launch of my collection Little Creatures (Poems of Insects, Small Mammals and Micro-organisms) which takes place at Mytholmroyd's Blue Teapot vegetarian cafe on 12th October is sure to feature at least a few poems in honour of my sluggish friends, since one of my guest poets is the very talented Anne Caldwell, whose magnificent collection Talking to the Dead (Cinnamon 2011) contains her own slug-inspired offerings, in the form of her uniquely observed Slug Language:


They have criss-crossed my lino
all night,wound together like a nest of snakes
to smear the soles of my feet
with their silver calligraphy.

More on Anne's slug poem, and her poetry overall, very soon ... but the first time I encountered the subject of the slug in poetry was in early 2004, in the magazine Envoi, courtesy of Maggie Butt, who projects an image of the slug as likeably sly, ducking-and-diving Puck-like Houdini:

Ectoplasm, faery bunting
festoons the taps and gas rings
the morning after the party

As, evasively and somehow heroic,

They outwit deadly salt rings
set to fizz their insides out
side-sliding death to vanish before dawn
like vampires to dank coffins. 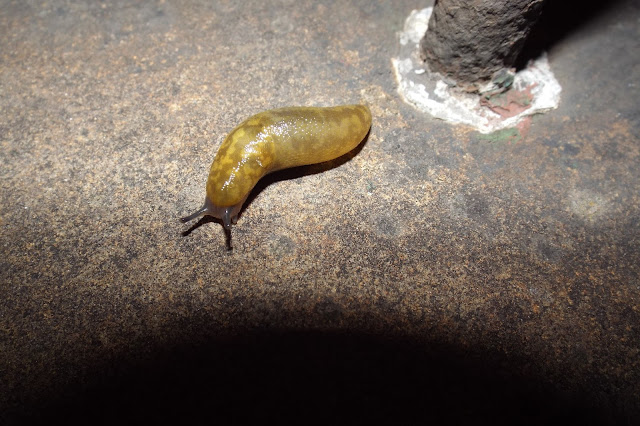 And for Australian poet Keren Peterson, the slug strikes up fires of lust, when the Streamlined playboy / of the arboreal world...
pursues his mate in circles
until clasped together on a branch
they fall like trapeze artists
into ecstasy
suspended by their own slime. 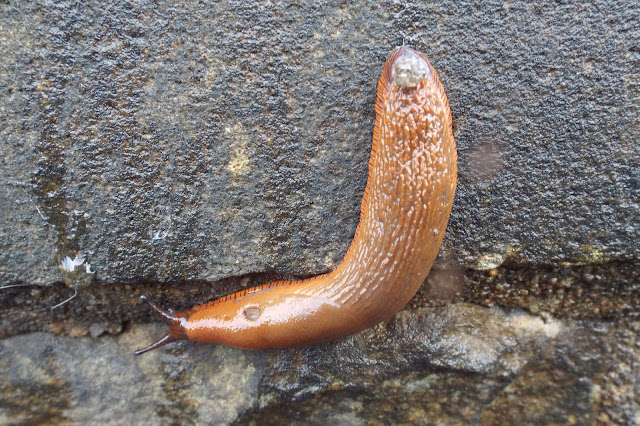 Similar sentiments are found within my own slug-centred scribblings - Little Creatures includes a description of my first (and so far last) experience of mollusc voyeurism, when, courtesy of the BBC's Gardener's World, I found myself observing two lusty slugs eagerly getting to know each other:

Crackling through compost
they are fattened with desire.  Antennae
prod the way,
like precision-guided missiles they have inched
the fibrous miles, slid through beds of rhododendron,
tubes infused with sensual electricity.

Slug Sex, which continues for a further two intimate stanzas, caused a minor stir when I first began performing it at readings three years ago, but possibly less so than the poem preceding it in the book - simply entitled Slugs, and beginning:

veined fallopian tubes
dredged from the innards
of sea creatures.

The poem was written in 2006, and when I first showed it to colleagues eighteen months later, along with other of my gastropodal jottings, appreciation was hardly forthcoming!  It is fair to say that slug imagery veers towards the gooey side of life, and slugs play frequent sticky cameos in many of my other poems, but the first time I wrote about them, in the spring of 2006, it was in a tenderer vein, following a brief, silent, but mutually intense experience I shared with two other beings, starting with curiosity and concluding with a reflection on my own invasive clumsiness:

The cat ad I, we crouched,
scrutinized the newcomer
languishing on concrete,
body tinted in brown blotches
like a cancerous lung,
death-like and unmoving,
cold.
Rain-bathed and night-primed
it stuck firm to the drive
like a stalagmite,
belly clamped in slime,
but my prod sent ripples
through the bulge:
antennae scanned
shot back within
the mask-like fold
of protective skin. 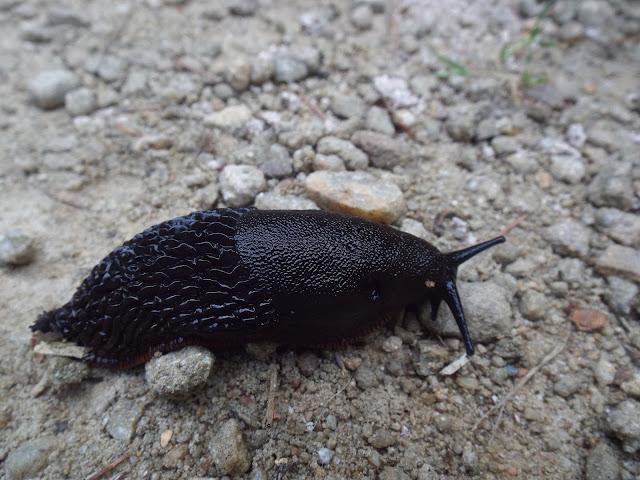 More than a decade later, I would again find myself absorbed by nocturnal ponderings relating to these vulnerable animals, investing my invented verse form, the Octolune, with a rare slug theme:


Moon of slugs,
oh slimy dollop of refulgent light
whose twisting beam
sinks oozily through nights,
you hug the starry folds
of a lonely sky
in a thick and syrupy,
glutinous cuddle. 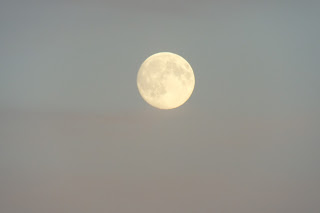 For all that its somewhat unearthly appearance lends eclectic imagery to the imagination, Yorkshire-born poet and Wiccan practitioner Robin Skelton seems to sense something more implicative of the Human Condition:

I am a mouth,
a wet mouth, moving
slow suctions
of stiff leaves
into my myriad teeth,
eating
green till the bared veins
stand out,
quiver, brittle,
and, tensed, snap.

I am both he and she
one slippery
muscle, the pulse
of absolute darkness,
mouthing my eggs
upon decay,
and, humped, sliming
wet silver
at every surge.
I ripple, glisten
black, stroking
the prone surface

into my hunger,
each caress

heart’s need and ruin,
every thrust 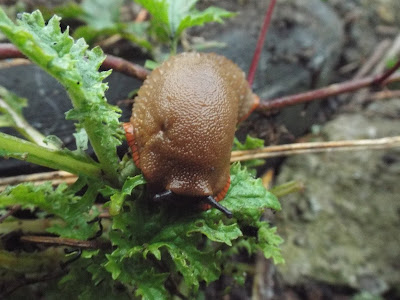 Skelton’s poem breathes with life - with recognizably human words like love and hunger. The keen feeling of empathy is unmistakable, and I too feel a kinship with the world of slugs, and often wonder how often, here in the Calder Valley and more widely in the world, we might come across any number of slugs, without ever realizing the many ways in which they benefit our environment - decomposing matter, fertilizing soil, providing food for amphibians, reptiles and birds, supporting the eco-system.  These beneficial behaviours cannot have been far from the mind of American poet Richard MacWilliam, when he wrote his wonderful tribute to the splendours of the slug, with which I would like to finish:

On a bed of foot-spittle
Glides through the night towards dreams of vegetation,
Will devour in one sitting
The hopes of gardeners,
Then hide with the dawn:
No wonder they chase it with forks and salt,
Brewed liquor and the stamped foot!

Eats its own body weight and more
Through the witching hours,
In mists and under a moon,
To leave the world clean -

So who can complain ?
Feeds hedgehogs, foxes, toads and birds,
Can stretch 11 times its own length,
Has 27,000 teeth,
Can crawl across the edge of a razor.

Only brute flesh,
But see the wonder ! 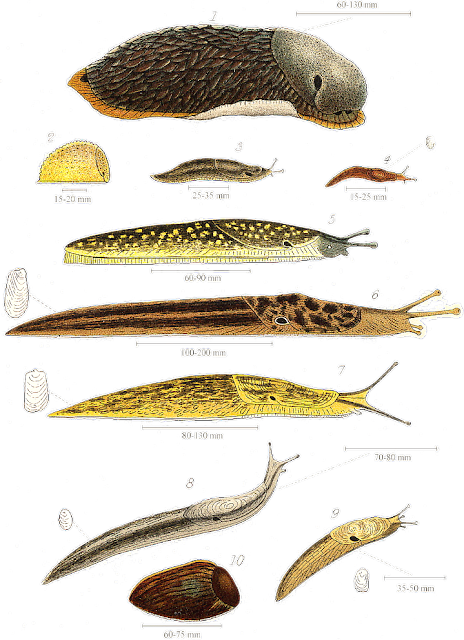 Posted by Caterpillar Poetry at 22:15