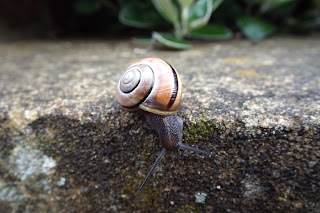 As I trawl back through the poetry which first prompted my own debut collection Little Creatures (Poetry of Insects, Small Mammals and Micro-organisms) I am reminded of two slightly surprising realizations.


One is that snails - like slugs - are not insects, small mammals, or even micro-organisms in the strictest scientific sense.

The other is that I had completely forgotten about the Malawian poet Albert Kalimbakatha, and his Snail's Lament:

Crumbled I die
Tortured I die
Out in the dark

Crumbled I die
Tortured I die
Out in the rain

Crumbled I die
Tortured I die
Away from green
Grassland home

Crumbled I die
Tortured I die
On muddy roads

Crumbled I die
Tortured I die
In innocence.

Crumbled I die
Tortured I die
Under man's foot.

Kalimbakatha, who earns a living as a teacher for the Distance Education Centre, has been published widely in anthologies.  I first read his work more than ten years ago, and although I had already written the opening poem of my collection, in which the plight of the book's eponymous creatures is epitomized by their being crushed beneath the passing feet, undoubtedly some essence of Kalimbakatha's poem must have stayed rooted in my mind, for when I began my first (and, surprisingly, so far my only) poem about snails, I would write:


They call me sloth, slime-sloper,
pest,

they curse me,
pour down chemicals
or crush my brethren underfoot,

squashed and mangled under tyres.

The themes of Little Creatures began to surface in my mind in the late summer and early autumn of 2001, when, walking home from work, I found myself treading carefully to avoid treading on any one of the unexpected gluts of snail shells which seemed to have suddenly abounded on the rain-bleached pavements.  Albert's poem exemplifies the dilemma from the snail's perspective, and could be emblematic of all suffering, of the fate of all innocents Away from green  / Grassland home, whether out in the dark, on muddy roads, in the physical world or within the private tortures of the mind - and it also speaks to us of the plain, straightforward suffering of actual snails, crushed and crumbled, blameless and unlucky, out in the rain. 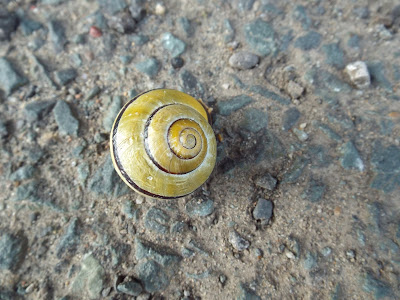 Posted by Caterpillar Poetry at 00:41