Having just re-published my poetry collection Little Creatures: Poems of Insects, Small Mammals and Micro-organisms, I've found my antennae finely tuned to poetry relating to the diminutive, so my discovery of Fungisayi Sasa's poem Flight Paths was most welcome, especially in the context of Caterpillar Poetry:

Does Sir David Attenborough know that African blue-winged butterflies migrate?
My heart is the flame-lily on which they land. 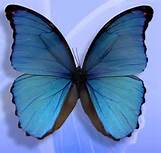 Fungisayi Sasa was born in the Zimbabwean capital Harare, and, having been a poet since childhood, came to England in 2002 to study Business Administration, but enrolled three years later at the University of Bedfordshire, to study Creative Writing.  A children's author and a writer of fiction, she produced her debut poetry collection, Searching for the Perfect Head, in 2009, through New York publisher Eloquent Books. Much of her early work centred around her immediate surroundings and family, as the poet explained to Poetry International: I once wrote a short story about my older sister called 'My Margaret Murdered', complete with a cover of blood dripping from her neck. Naturally, most of my family didn't encourage my writing pursuits.
But this sinister quality would be refined by the time Fungisayi Sasa's first poems started to be published, into a tightly controlled style of macabre imagery, wryly framed in a sense of irony, allegory, or surrealism:

Concrete cows have calculated
that only eight chicks are required
to change an energy-saving
light bulb.

There is often a vein of ghoulishness, as in Monsters, where

they shut
themselves
behind doors
in darkening rooms

everywhere
memory has
broken through
barriers of the mind. 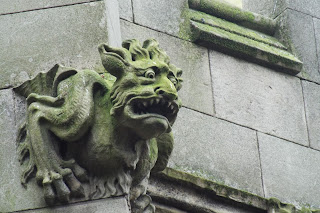 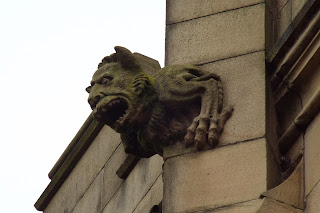 A somewhat shocking poem is the brilliantly brutal I Am Cannibal, in which - to my mind at least -  human hypocrisy and industrialized, cold-blooded violence are served up in a deliciously ironic slab of straight-faced satire:

Take one man.
Remove his feet and head (for the head holds the mouth,
the mouth conceals the tongue
and a man’s tongue lies)
Pound, then knead the flesh until soft and pliable.
Place in a preheated oven (400°F/200°C/Gas 6) and roast for 50 to 60 minutes.
Serve hot before bitterness sets in.

But the poetry of Fungisayi Sasa is not all composed of metaphor, grisly imagery or dark humour.  It treads a finely woven tapestry of horror and lyricism - for instance, the hypnotic Dreamscape:

sleep deprived hides in chambers of
naked-bulbed wakefulness where
the conscious splits and hours
hidden by the mind creep
on reality and masqu-
erading thoughts
rise to take
control.

There are also more direct references to international problems, as in her witty retort to the rhetorical effusions of President Mugabe:

mr president
nobody is tuned in
to your frequency

or the hopeful Anthem, with its contrasting depictions of the land and people, and the nation's violent authorities:

when untreated water flows
from stainless steel taps
and kills thousands,
when those who cry out for peace
disappear; only to be returned
beaten and broken

and the scathing Myths and Legends, in which a return to the poet's home city reveals a place where Graveyards overflow, reminding her our country is in crisis:

I roam the streets of our sunshine
city where death no longer yields
wailing or tears
but mute apathy.
Newspapers preach abundance
whilst the government’s doctrine of pilfering
and hoarding wealth thrives.
Where is the man who swore to rule
for the good of the people?
Where is the mind which conceived
a vision of independence?
The man has grown old and his wilted
wits tyrannize us all.

The poem is a blistering assault against political corruption, the crumbling of a dream gone sour, and a testament of despair at the Titan who fought for freedom, but now has had his fill and tramples many in his haste to kill and eat.

I walk through the ruins
of what once was a mighty fortress
of stone.
The wind echoes emptiness
and the merry conversations of a prosperous people
are now
silence. 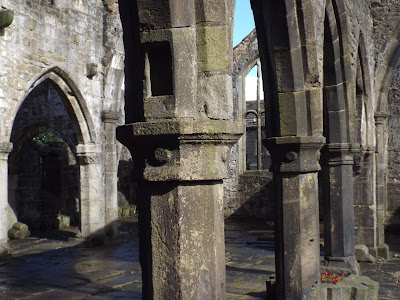 Many of the poems of Fungisayi Sasa drip with pain, anger, and disgust.  When aimed at the legacy of her country's leaders, her ire is sharply focused and unwavering:

There is often the sense of a poet in exile:

Fungisayi Sasa is a poet of versatile talents -  polemical, with a targeted anger, and an ability to contextualize humour into rebutals of corruptions and injustice.  Unafraid of peppering her immaculate English with words and phrases from Zimbabwe (I owe to her my discovery of the Shona word nematambudziko, meaning "my condolences") in ways that lend an authentic edge to her laments for the troubles of her native land, she is a name to watch out for, an exciting talent to emerge from the country which brought to us the poetry of Zimunya, Chimedza, pioneering female voices such as Kristina Rungano and Ethel Kabwato, whose spirit Sasa's writing may be said to echo - but with the wonderful uniqueness of her own poetic identity, an identity of wit, lateral thinking, subversive storytelling, and, above all, beautiful language, and a deep sense of love for the land of her birth.

You are beautiful, my Zimbabwe,
though the sharp words of corrupt men
are the heavy, hard instruments
raping you again; again and again,
though the stench of a government’s
betrayal
is raw sewage fermenting in your streets
and even though your children lick the pus
from their wounds so that hunger may be appeased.
You are still beautiful. 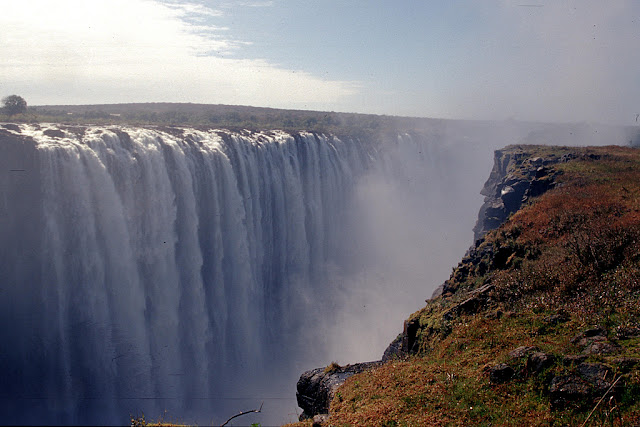 Posted by Caterpillar Poetry at 18:51