A Spark Before Dark

This Saturday saw the third of my three readings devised to re-launch my pamphlet Little Creatures, at Legacy Art Gallery, Todmorden.
The readings back in the summer have included, as documented elsewhere on this site, two other Calder Valley venues, The Blue Teapot vegetarian cafe, Mytholmroyd, and and the Fox and Goose, Hebden Bridge, and featured a wide range of poets from England, Ireland, Scotland, the USA and Israel.  The final reading took place at the onset of the Todmorden Lamplighter Festival, an illuminated street parade, and rather appropriately there were poems on the theme of lamplight on this final night.  This was especially significant as the subject of lamps happens to be the focus of a poem by one of the tour's previous guests, Atar Hadari. 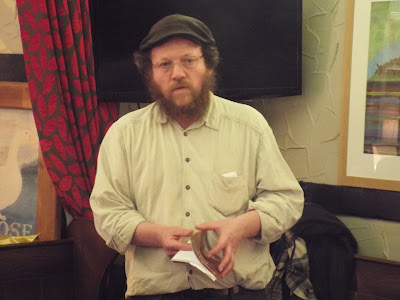 Atar joined me last Tuesday to deliver readings from his 2013 Indigo Dreams collection Rembrandt's Bible, described by Calder Valley poet Char March as a dextrous and moving collection full of humour, tongue-in-cheek-ness, knowledge, superb imagery and beautiful ways in which they leave room for the reader and their interpretation. 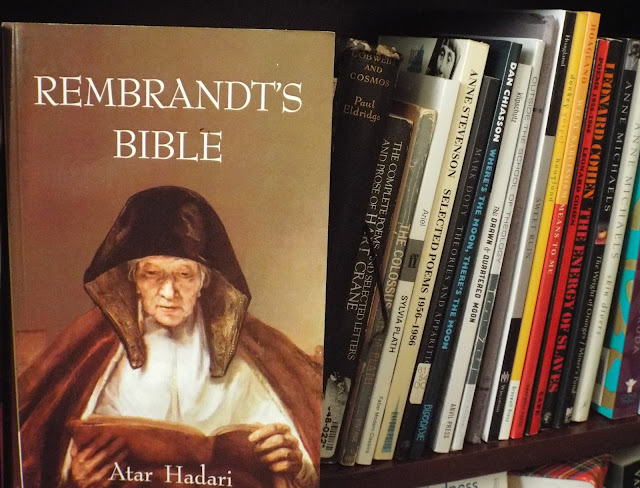 Among poems about Biblical figures such as Samuel and Goliath, Moses, Maimonides, and settings as diverse as the Wailing Wall and contemporary Hebden Bridge, there are also deft snapshots of domestic life, family histories and remembered schoolday scenes.  One of these more personal stories is the gently powerful Lamp Gathering, which I first heard Atar recite at The Bookcase, Hebden Bridge, watching him deliver the poem against the glass backdrop of the shop's window, the spring night outside bathed in the crimson glow of street lamps.

I saw the first on top
of a book case, hiding, funereal
and black as a cenotaph
tucked behind my father's photo.

The next was on the ledge
of the window and she showed it
- opening the tiny frame
in the heart that contained ten commandments.

The poem develops into a dialogue between the narrator and his mother, who has begun collecting lamps found in junk shops as more and more Jews die / and their sons clear their house for scrap.  Perplexed, the poet ponders:

Why should she collect the lamps
of the dead, who don't light their candles,
take them home instead and light
just her own one I could not say.

But she stands running her hands
on the candle cups.  Her doctor mentioned:
"You can't just leave them.  Its a call."
And my mother agreed,

The sense of retrieval and conserving a past fading from the general consciousness is elucidated in the mother's reiteration:

"You can't leave them.  In shops
you have to rescue them."

...and the poem ends with a kind of conversion, the initially skeptical narrator now urging the reader:

If you find a lamp
please do not leave it-
somehow you'll find your way back
to when you were at home, and light was with someone
and a spark fell before dark. 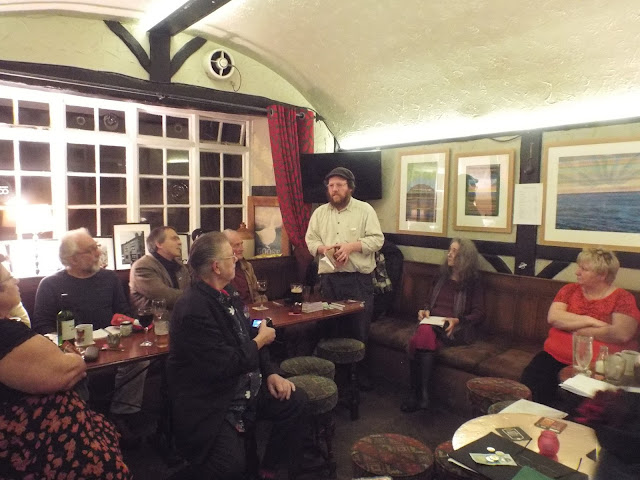 At the third reading in the gallery on Saturday, Nuala Fagan was to visit the theme of lamplight with an as-yet unpublished, new poem, called Glow:

Electricity is a light that switches on things
that fly in the night
things that shift,
that tap
and breathe too close
is a reassuring miracle that keeps you alive
even after your heart has stopped

As with Atar's poem, Glow illumines the personal and private through a prism of outwardly recognizable imagery, transfiguring the glow of electricity into a recollection of that time when the two of you / sat in the lamplight, and bringing to life the memory of light that:

lived on edges of china and brass
and on the contours of her hands
as they flickered in and out of the shadows. 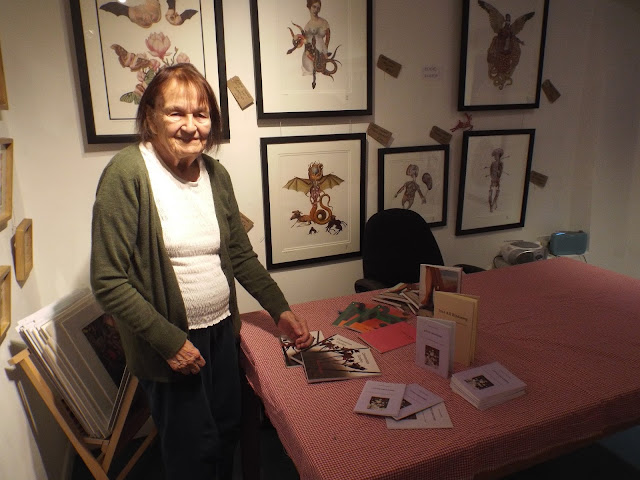 Posted by Caterpillar Poetry at 13:07