It was my privilege to deliver a talk today at the Bronte Parsonage, Haworth, about the influence of Halifax on the life and work of Branwell Bronte.  As explored in my film A Humble Station? Branwell Bronte's Calder Valley Years, Branwell's time in the Valley was short lived but productive, yielding many poems and gaining him a circle of loyal friends who would have a positive impact on his poetry.  Working as a clerk on the Leeds and Manchester railway, first at Sowerby Bridge train station, then at Luddendenfoot, in the early 1840's, he enjoyed socializing at Luddenden's Lord Nelson pub, which housed the first lending library in the Ridings area, and where he would share poetry with such authors as William Heaton, William Dearden, "The Bard of Ovenden" Thomas Crossley, and the so-called "Airedale Poet", John Nicholson. 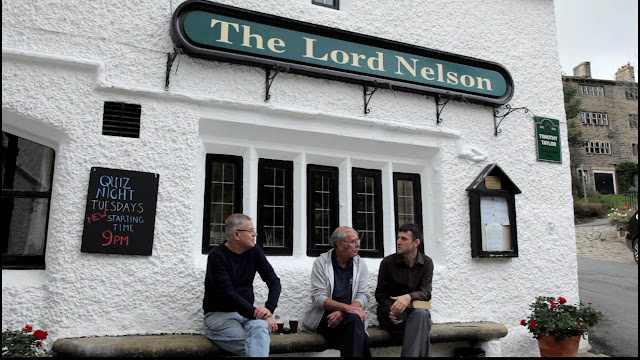 Branwell's job on the railways also provided him with the inspiration for some of his writing:

Amid the world's wide din around

I hear from far a solemn sound
that says Remember Me

I when I heard it sat amid
The bustle of a town like room
Neath skies with smoke-stained vapours hid,
By windows made to show their gloom-
The desk that held my ledger book
Beneath the thundering rattle shook
Of engines passing by
The bustle of the approaching train
Was all I hoped to rouse the brain
Or startle apathy. 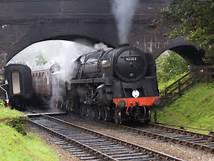 Above the bar at the Lord Nelson, is an inscription from a letter of Branwell's in which he claims that he would rather give me right hand than undergo again the malignant yet cold debauchery which too often marked my conduct there - a quip which seems to have been intended as self-satire, but which has further fuelled the vision of him as a staggering, hopeless drunk.  During my talk today, I did not labour to dispel the idea that Branwell was certainly fond of a drink, but rather to illustrate that this was only one side of his character, and ought not to overshadow the not inconsiderable achievements of his poetry.  In particular, Branwell published several poems while living in the area, which were printed in the acclaimed Halifax Guardian, a newspaper based on King Cross Street, later to merge into the Courier, whose poetry pages were notoriously difficult to break into, owing to their editors' highly discriminating tastes.

In The Brontes, Juliet Barker's book on which my film is partly based,  we read of how the chief merit of Branwell's new job was his proximity to the literary, artistic and musical circles of Halifax, a town long renowned for its culture.  John Frobisher, the organist at Halifax Parish Church, was a prolific organizer of concerts … there were regular, if bizarre, lectures in the town and, in December, a newly refurbished and reorganized Halifax Theatre opened … Juliet refers to  the wealthy and cultured town of Halifax, and points out that Halifax attracted eminent musicians from all over Europe. Branwell would have been well aware of the attractive Piece Hall, an 18th Century hall designed for traders from the cloth trade and often used for open air events, pictured here beautifully by one of the artists he socialized with in Halifax, John Wilson Anderson: 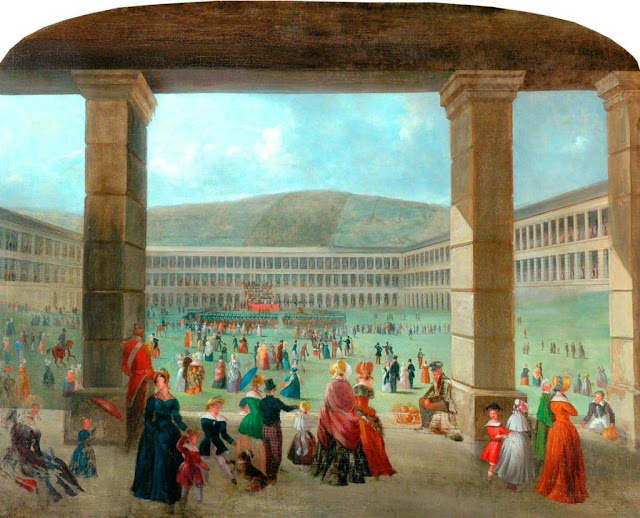 and which today he would have found brimming with bookshops, arts and crafts, food and drink, and live music: 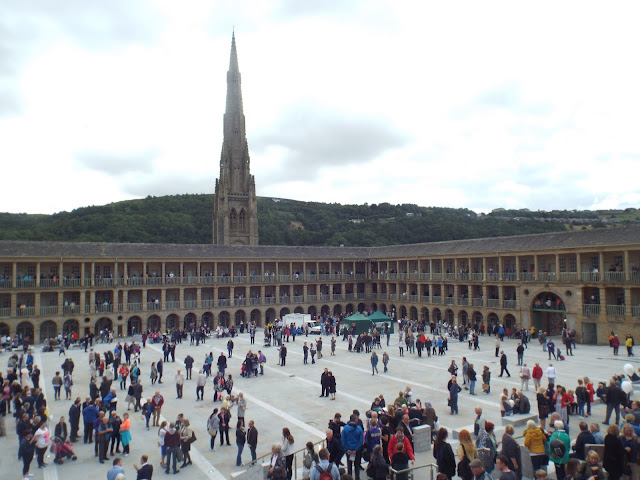 The story of the Bronte family's Halifax connection really begins in 1811, as documented in my essay The Brontes in Halifax http://simonzonenblickcaterpillarpoet.blogspot.co.uk/2015/09/the-brontes-in-halifax.html , with the publication of Patrick Bronte's Cottage Poems, printed by a company based on Old Market, whose premises would have been above the chippy in this picture: 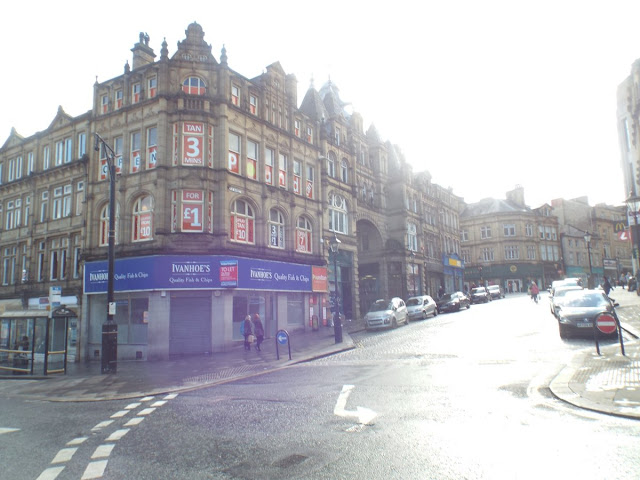 ...which, by a rather delicious irony, was situated directly opposite one of the pubs where Branwell used to drink, The Union Cross hotel: 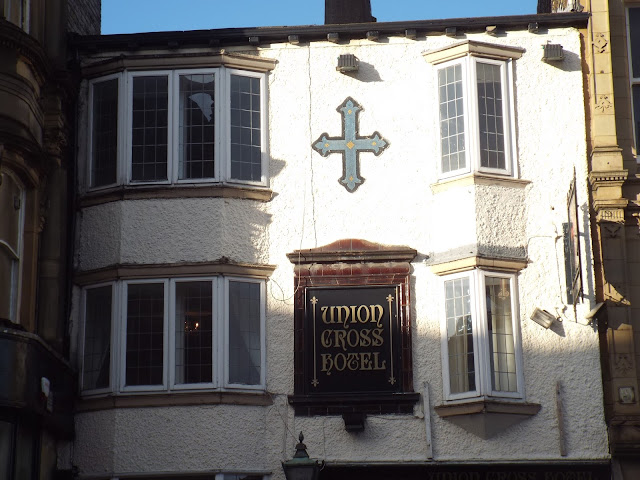 No doubt Patrick, the Reverend Patrick Bronte of Haworth Church, would have heartily disapproved of this short piece by Branwell, taken from a longer work in which he channels the identity of the apocryphal figure of Azrael, a sacrilegious sprite who turns up in various guises in Christianity, Islam and Judaism, also published in the Halifax Guardian:

There is no God,
I know there's none -
neither of spirit or of stone.
No holy hill or idol shrine
has ever held a power divine.
Nor Heaven above nor Hell below
can minister to wail or woe
I feel that when the body dies
its memories and feelings die
that they from Earth shall never rise

Perhaps more in keeping with his Anglican upbringing was Branwell's friendship with the sculptor Joseph Leyland, two of whose works can be found in Halifax Minster.

There has been a church at the location for nearly 900 years, and the Minster's tower dates back to the 16th Century: 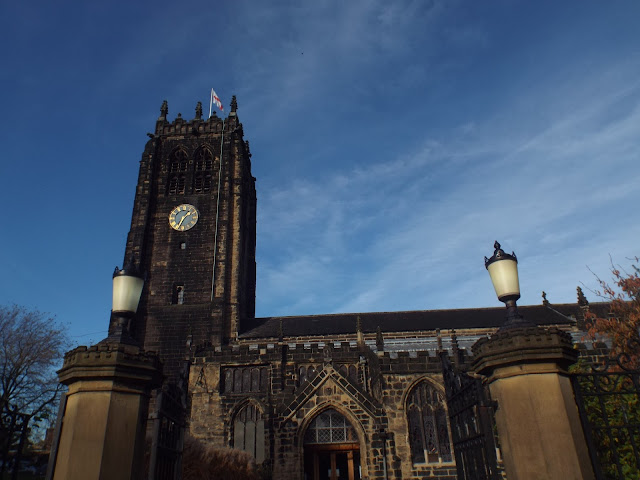 ...while various elements of its interior also date to mediaeval, Tudor, and Stuart periods: 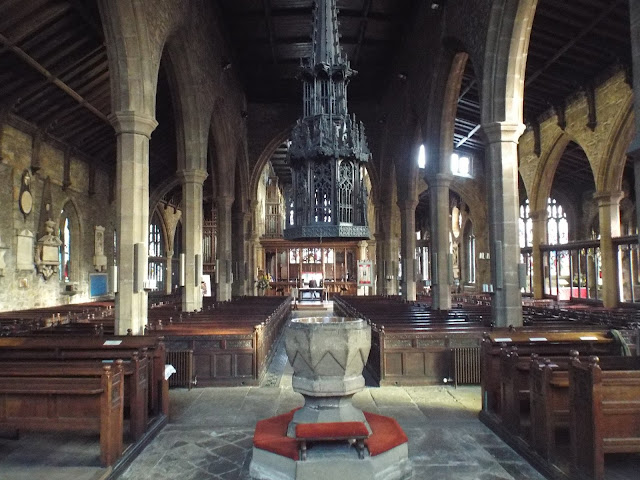 One of the memorials above the church's Jacobean pews was sculpted by Leyland from his London studio in 1838: 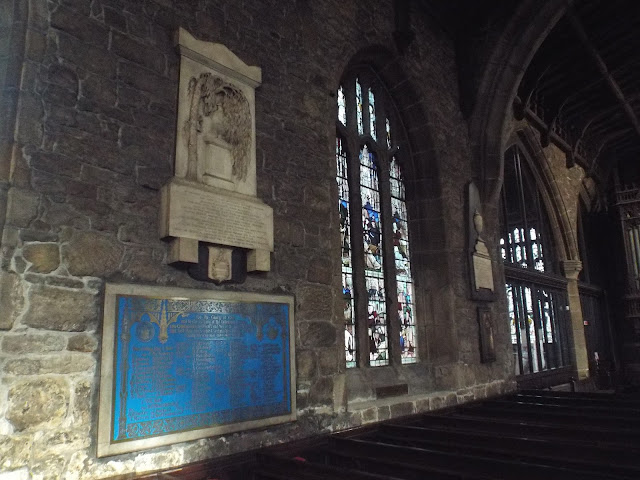 and in 1847, he would create the following beautiful commemorative monument to Bishop Robert Ferrar, a 16th Century Protestant clergyman born in Ewood, near Mythomroyd, burned at the stake during the Reformation for refusing to renounce his faith while serving as a Bishop in Wales: 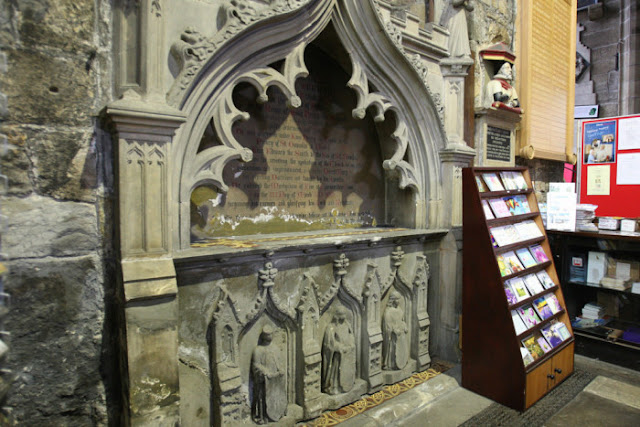 By the 1840's, Leyland was living and working in "the Square", a part of Halifax known for its artistic scene, and site of today's library, museum and Square Chapel theatre: 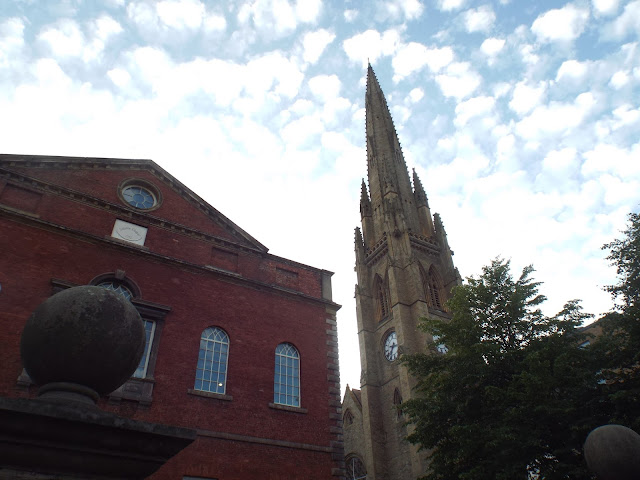 ...and his younger brother Francis, who later became an antiquarian bookseller on Halifax's Cornmarket, wrote a book about the Brontes, in which he remembered his first meeting with Branwell as a teenager:

The young railway clerk was of gentlemanlike appearance, and seemed qualified for a much better position than the one he had chosen...His voice had a ringing sweetness, and the utterance and use of his English was perfect. Branwell appeared in excellent spirits, and showed none of those signs of intemperance with which some writers have unjustly credited him about this period of his life.  My brother had often spoken to me of Branwell's poetical abilities, his conversational powers and the polish of his education, and on a personal acquaintance I found nothing to question in this estimate of his mental gifts, and of his literary attainments.

Branwell shared a love of walking among the hills and woodlands of the Calder Valley with several of his Halifax associates, and friends like Joseph Leyland might be expected to have set a good example - but alas, it seems that the sculptor himself was prone to heavy drinking, became an alcoholic, and died in debt just three years after Branwell's own untimely death.  In a long poem composed in December 1841, Branwell depicts himself in a state of remorse, reflecting on his current position, past, and fate:

Oh God! while I in pleasure's wiles
Count hours and years as one,
And deem that, rapt in pleasure's siles,
My joys can ne'er be done,

Give me the stern sustaining power
To Look into the past,
And see the darkly shadowed hour
Which I must meet at last;

But Branwell's talents seemed to lay more in the direction of wider philosophy, his poetry often suited to a sense of analysis of wordly ills, as in the following piece which was printed in the Halifax Guardian:


Increase of days increases misery
and misery brings selfishness, which sears
the heart's first feelings: mid the battle's roar
in death's dread grasp, the soldier's eyes are blind
to comrades dying, and he whose hopes are o'er
tuns coldest from the sufferings of mankind;
a bleeding heart oft delights in gore;

Here, Branwell elucidates a viewpoint more associated with psychology or post-modern social theory, than the 19th Century British worldview - that of assessing an individual's proclivity to wrongdoing in the context of their own experience, and his suggestion of trauma engendering or unleashing the capacity for tyranny places him decidedly on the humanist side of the moral and political debate, and he demonstrates an acute ability for empathy across the boundaries of personal experience.  The Parson's son from the rural lanes of Yorkshire is able to share a common humanity with those who have suffered on the front lines of battle.  If only Branwell were able to extend more of this compassion towards himself.  In the summer of 1845, living back in Haworth and increasingly gripped by his addictions to laudunum and alcohol, Branwell would imagine a corpse floating dead at sea, to who he composed the following sad lines:

I have an outward frame unlike to thine,
Warm with young life - not cold in death's decline;
An eye that sees the sunny light of heaven-
A heart by pleasure thrilled - by anguish riven -
But in exchange for thy untroubled calm,
Thy gift of cold oblivion's healing balm,
I'd give my own youth - my health - my life to come,
And share thy slumbers in an ocean tomb.

He was not to know that within three years, he would indeed be in his tomb.  Branwell, whose official cause of death was tuberculosis, lost his job on the railways in 1842 after a mix up with some money, the fault of a thieving colleague but for which unhappy circumstance he, as clerk-in-charge, had to bear responsibility, and would die at the age of only 31, just at the time when his sisters' literary endeavours were beginning to bear fruit.  Painted in many ensuing biographies as a wastrel, defined by his addictions and misfortunes, Branwell was a tragic figure, his contributions to the world cut short, and his memory only now beginning to surface in a positive light. The efforts of many local artists have resulted in poetry readings, radio discussions, and my own documentary film, not to mention the astounding television film To Walk Invisible, by Calder Valley born writer Sally Wainwright, and the wonderful bicentenary celebrations at Haworth parsonage, which include a marvelous exhibition of poetry about Branwell, by Simon Armitage.   Branwell's legacy is celebrated by a blue plaque at Sowerby Bridge station, and by the lovely Bronte Garden, created by volunteers, containing flowers pertaining to Bronte poems and novels,  and lately winning a tourism award: 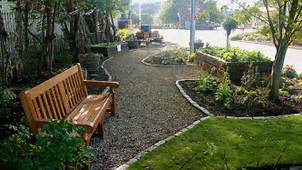 Although the later periods of his life may have been characterized by disappointment and mistakes, Branwell's time in the Calder Valley was far from sparse in terms of poetic productivity, and his creative encounters in Halifax, together with the platform provided for him by the Halifax Guardian, certainly shine a  positive light upon the life and legacy of this talented, but troubled man.

On earth we see our own abode
a smoky town, a dusty road
a neighboruing hill or grove;
in Heaven a thousand worlds of light
revolving through the gloom of night
o'er endless pathways rove.

While daylight shows this little earth
it hides the mighty heaven
and, but by night, a visible birth
to all its stars is given
and, fast as fades departing day,
when silent marsh or woodland grey
mid evening's mist declines,
then slowly stealing, star on star,
as night sweeps forward, from afar,
more clear and countless shines. Posted by Caterpillar Poetry at 22:02