Beautiful Flocks of the Mind - Leytonstone, and the Poetry of John Drinkwater

Fifteen years ago, I was living in Leytonstone, east London, birthplace of the English poet John Drinkwater (1882-1937) 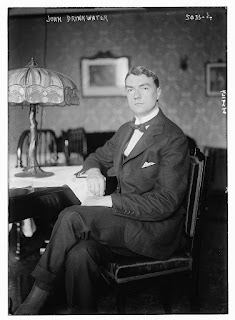 Although never a prosperous area, the Leytonstone I lived in was doubtless different to the town Drinkwater would have known in the late 19th Century.  A sprawling corridor of poverty, whose High Street, on which I lived, was by day the busiest road I have ever known - with incidents of road rage not unknown - and became by night a red light district, its atmosphere was one of impending violence and unrest, and yet a strong sense of community was evident.  I have never lived in an area more friendly, nor one in which friendships were so easily forged, and be it mong my neighbours, the local traders, the drinkers at the anarchic Irish bar, or even the homeless wanderers and "working girls" who would haunt the terraced streets in the bleak small hours of the London night, conversation, often eased by copious quantities of vodka, was forthcoming.  Leytonstone, with its warm-spirited West Indian coffee shop, its tube station draped in mosaic memorials to the film director Alfred Hitchock, born in a grocer's shop at the north end of the High Street, near where the road peels off into the fielded fringe of Essex, with its pretty community garden and dainty pond, its landmark church and its dingy crack-houses enormous tower blocks, now demolished, and its multitudes of terraced houses, lived in by families of almost every race, creed and colour, was a home to me, and the progenitor of a thousand memories. 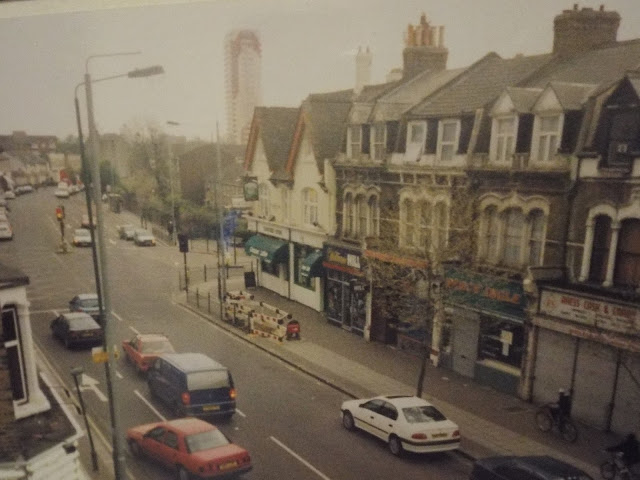 Drinkwater's rather naive, pastoral poem The Vagabond depicts the life of a gentleman of the road, free from worries amid scenes of bucolic innocence. I know the pools where the grayling rise,says the wistful narrator, I know the trees where the filberts fall, I know the woods where the red fox lies,The twisted elms where the brown owls call. Owing to the fact that I sow no seed and I pay no rent, an idyllic existence is enjoyed:

I thank the Lord I'm a rolling stone
With never a care to carry. 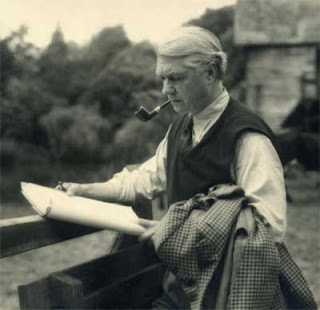 I often wonder, when I read his hearty, unaffected lines, how much the jolly wanderer these lines imply, would have had in common with his 21st century counterparts, subsisting among the concrete labyrinths of Leytonstone, who would wind their ways to beg at Stratford tube, or congregate around Lea Bridge Road or the vast estates on the outskirts of Wanstead Flats to score heroin.

I know the pools where the grayling rise,
I know the trees where the filberts fall,
I know the woods where the red fox lies,
The twisted elms where the brown owls call.
And I've seldom a shilling to call my own,
And there's never a girl I'd marry,
I thank the Lord I'm a rolling stone
With never a care to carry.
I talk to the stars as they come and go
On every night from July to June,
I'm free of the speech of the winds that blow,
And I know what weather will sing what tune.
I sow no seed and I pay no rent,
And I thank no man for his bounties,
But I've a treasure that's never spent,
I'm lord of a dozen counties.

There was Andrew, an emaciated African who carried his clothes in a bin bag, who had worked as a prison guard for many years, and who, on retirement, had found it impossible to adapt to life on the outside; there were drug addicts and petty criminals, illegal immigrants, and lonely people whose lives in Leytonstone were as lost as mine, but without the pretence of involvement in the civilized world - in my case a job for Newham Social Services, followed by stints for various charities in the care and homelessness sectors. There were the hostile figures hunched silently in darkened units selling Islamic books, disdaining to answer my greetings, the Afghan refugee I helped to find his way to nearby Leyton, who was too terrified to seek the refuge of the local mosque in case they detected the fact that he was drunk; there was John, the half-Maltese hairdresser who befriended me, the Indian family who ran the shop across from my small flat, its line of trade so wide as to encompass almost every line of product, and who took me in almost as a member of the family. There was the Spanish chef, who had been working at Brighton's Grand Hotel on the night that it was bombed in 1984, with whom I would meet for nervous dates, but with whom I would never, thanks to my own impenetrable barriers of absurd reserve, embark on anything more intimate than polite coffees or drinks washed down with spluttered small talk.  There were the crowd at the Croppy Acre, a pub almost defiant of description, where my friends included both militant Irish Nationalists and Unionists - some of whom worked behind the same bar.  A record I listened much to in those days and nights, was Marc Almond's Tenement Symphony, and in some respects our town, in that pivotal, nerve-racked period of phoney war squeezed between 9/11 and Iraq, might be summed up by the title of one of the album's songs: Beautiful Brutal Thing.
Given my dangerous mixture of idealism ultra-naivety, and the sorts of company I was often keeping, it is a mystery to me that I remain alive to tell the tale, yet despite my own often grim financial situation, my work in the most depressing sectors of human misery, and my deep unease at the increasingly volatile global situation, when I see the photographs of those strangely liberated times, it is a happy, young man who smiles back at me, looking almost like Drinkwater's vagabond, without a care to carry. 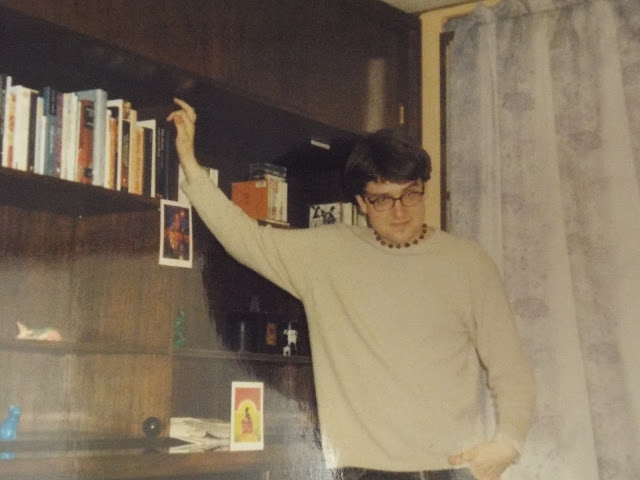 There are other resonances in Drinkwater's poem. It was among the Victorian sidestreets of late-night Leytonstone that I saw my first fox - one summer midnight, it stopped me in my tracks, stock-still and beaming through me with two eyes as powerful as golden darts.

in and out of lamplight,
smooth as a glob of honey
dissolving into coffee
the midnight searcher tries his luck among the backstreets -


East-end terraces tangle into criss-crossed sprawl,
estates expand to concrete crush,
bottlenecking into pub backyards and warehouse forecourts,
deserted car-parks, scrubland, a grid of lanes where drinkers
straggle out of pubs, prostitutes cross paths, the urban wastelands
and a frosty Wanstead Flats, which veer into the spiderweb of sliproads
pre-empting the M11.
Turning down the High Road, into a block of buildings tightly tucked
into the bricked-in ghetto of east London, I am startled by his stare:


Seeing me, his gait assumes rigidity,
a temporary tightening of muscles.
Frozen stiff, this frame
of burnt-oak,
nameless midnight wanderer,
mammal of the alleyways,
once more slips into a casual insouicance
shuffling into shadow.


What I caught last
was not the shapely outline, gingery tint or snow-fluff
tail-tip, as fox fleet-footed out of visibility
but, a souveinir from its shoot-back glance,
two amber eyes half answering,
half questioning. 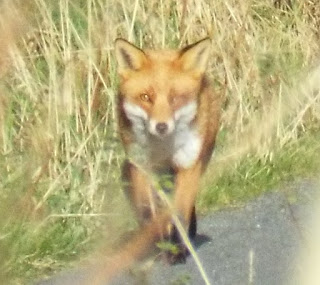 I said farewell to Leytonstone on a sleety day in early 2003, watching from the window of a Salford van as the concrete cobweb of its teeming streets and houses spiraled into the background like a tunnel winding into obscurity.  We headed past motorway service stations and flat fields, the neatly sectioned agricultural miles of Southern England gradually rolling into the wilder indiscipline of the Northern countryside, and through the January greyness of South Yorkshire, the Sheffields and the Doncasters and the Wakefields weeping into wintry mirror-images.

With eyes upon the gravel
He does not heed the year,
Among the lives that waken
He moves but does not live,
A bitter way to travel
He travels without fear,
But with no blessing taken
Goes on with none to give.

(From The Passing of a Stoic, by John Drinkwater) 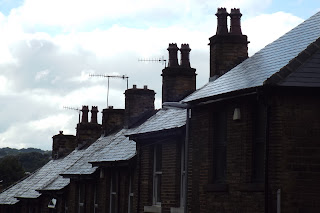 The next time I saw London would be in December 2005.  Emerging onto the street from Tottenham Court Road tube, I saw from the newspaper boards that David Cameron had won the Conservative Party leadership, and an old Irish woman tried to sell me a sprig of heather.  Neither prospect filled me with abundant joy. In Stratford, I stumbled through swollen Christmas shopping crowds to take the trudge to my old home, felt lost and disconnected among the seemingly alien landscape of new discount shops and cash-and-carries.  On a District Line train I sliced through miles of ice, the ghettoized squalor of Limehouse splayed below like some frozen-over Hell.  Finally, at Romford, I repaired to the home of an old friend from Newham, the daughter of a prominent Kenyan politician who nonetheless lived in anonymous poverty among the jumbled dereliction of an over-crowded estate.  When the next morning, my friend, who had tried earnestly the previous night to convert me, went dutifully to her Jehova's Witness meeting, I took myself for a long walk through Havering park, a wide stretch of green belt which, in the glossy frost of mistletoe and holly, glistened in a peace more befitting of some rustic Dales village than a London over-spill.  Strolling through the fields, I came upon a herd of deer, ambling and lazing, some reclining in the winter sunshine, and was filled with a warm, contented feeling of unexpected joy.
Early the next year my poem about the deer was written, and it appeared in my 2014 collection Random Journeys 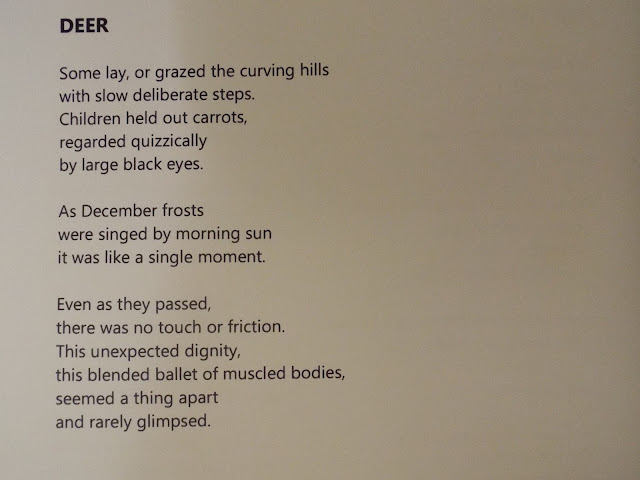 This morning I was reading through some poetry of John Drinkwater, and was surprised to discover a piece I had never read before, entitled Deer. It seems to encapsulate something of the idea of freedom, and of that same rejuvenating innocence offered by the deer I saw on the sylvan brink of London, on that cold, glowing December day.


SHY in their herding dwell the fallow deer.
They are spirits of wild sense. Nobody near
Comes upon their pastures. There a life they live,
Of sufficient beauty, phantom, fugitive,
Treading as in jungles free leopards do,
Printless as evelight, instant as dew.
The great kine are patient, and home-coming sheep
Know our bidding. The fallow deer keep
Delicate and far their counsels wild,
Never to be folded reconciled
To the spoiling hand as the poor flocks are;
Lightfoot, and swift, and unfamiliar,
These you may not hinder, unconfined
Beautiful flocks of the mind. 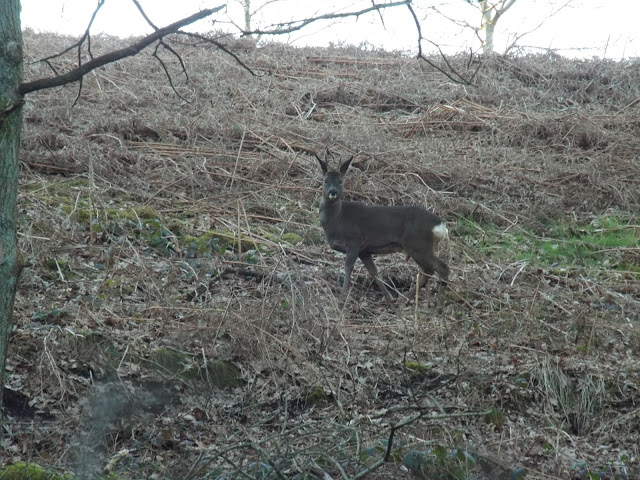 Posted by Caterpillar Poetry at 01:37