These Lonely Places - The Forgotten Poetry of George Moor

George Moor is something of a forgotten poet.  I first discovered his writing in the Archives section of the Halifax Central Library, and indeed, this mysterious figure lived for some years, and died, in the Calder Valley, as we shall see.  Between them, Calderdale and Leeds library services stock most of his collections and  several of his novels in their Reference stock, and I've managed to find several of his books on the usual sites such as Amazon and ebay.  But other than that, a large gaping hole appears where, in my view, Moor's place in the public consciousness ought to be.

At Halifax, with the help of the industrious library staff, I was able to uncover a couple of 1950's newspaper cuttings, from the local Halifax press, praising his early fiction, tipping this promising author for big things, while further research has yielded up a few facts and figures about his life and work.  I want to share these, in the hope of gaining further recognition for this somewhat mysterious writer, which I believe is greatly deserved. 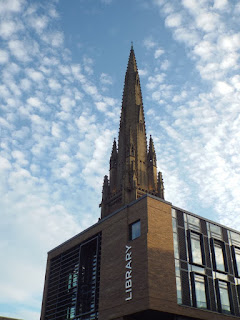 Born on the 3rd May, 1927, Moor attended the Holt High School, in Liverpool. My research has uncovered only that his birthplace was Lancashire, but the few facts I've been able to gather about his youth do contain other Liverpudlian implications -  In 1945, when he was 18, he had a long poem broadcast on local radio, about the Liverpool Blitz. The earliest publications of his poems appear to have been in The Listener, when Moor was just 13. 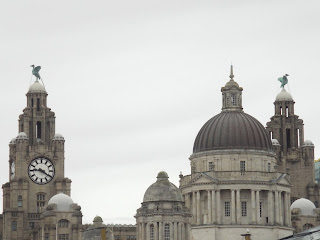 In 1945, he went to Cambridge University where he studied English and German, and awarded the Chancellor's Gold Medal for English verse. When he was 19 he was given the Oscar Blumenthal Prize by Poetry Magazine (Chicago) receiving a small award.The musicologist and composer Wilfred H. Mellers was a tutor at Downing College Cambridge during the same period that George Moor was a student in Cambridge.They collaborated on two works, with George Moor writing the words for a puppet masque and a chamber opera. After university he worked as a teacher in North Wales, then joined his family on their farm in the Yorkshire Dales. This farming life may well have influenced much of Moor's poetry - his best known work was a collection called The White Kid, in which a young man discovers a unicorn-like goat in a forest, who leads him to the girl he will eventually marry.

George Moor seems to have moved to the Calder Valley at some point in the early 1950's, eking a living from farming and writing at Hardcastle Crags. 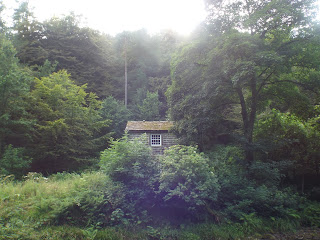 This would have been around same time as Ted Hughes and Sylvia Plath were known to stay in the area, and I find it tantalizing to speculate on if, how and where they might have met.   Certainly, although conforming to a regular rhyme scheme, Moor's poem about a moorland well, with its Biblical flowers, slightly sinister ravens, and spirit-imbued water, is not too huge a departure from the kinds of poetry each produced in response to the Crags.

A mirror chill with light
the morning well upon the moor
bright presence of shy water secretive,
wind-lit and pure,
the tack winds to it, sewn with gold-pricked broom,
mists rise around.
The mosses slope with starry flowers like pins
and sponge the ground.
The hunchbacked ravens wisely, quietly sit upon its posts,
and I rise and I tend near as one who serves a hall of ghosts,
kneeling to break the shining element,
reserved and fair,
brightening out of earth mysteriously,
it is like a prayer. 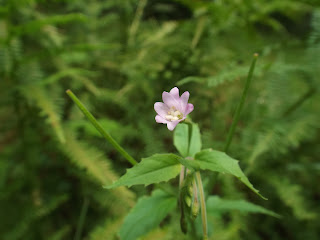 There is in Moor's poetry a tangible sense of Yorkshire history, as in his 1946 poem, The Brontes

They found life hard, with so much to be wept
They in the end preferred to keep their tears
Charlotte adopted irony and kept
balancing clauses through the bitter years.

Anne, who was innocent,
made much of Sin-from-which-in-time-the-hand-of-God
had caught her,
Branwell managed life, if he had gin,
and there was left the last, unlovely daughter.

She on the moors, when flowers advertized
their blaze in spring, discovered earth was good,
and life's long anguish can and must be prized
as a sort of rapture, not quite understood. 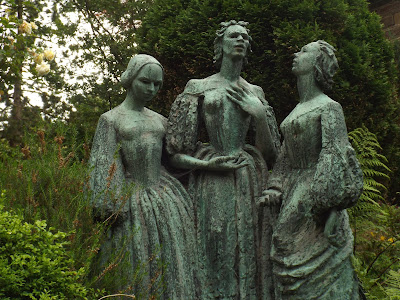 Moor's poetic territory was varied, but covers a great deal of mythical and zoological ground, and one thing I have discovered is that snails crop up more than once, as indeed they do in my collection Little Creatures!  Here is George in 1946,

and later, with the snail its self as focal point:

Curled in a world of wet,
in the dewy grass
like an old brown finger asleep!

The light of my lamp
windows bright rain-beads from every water drop
as you wind and stir
like a noonday leaf.

Sensitive watery satin!
One almost envies
your soft-skinned pleasure or your dew-sweet blade.

But you wilt in the light,
tenderly twisting.
I leave you in the dark. 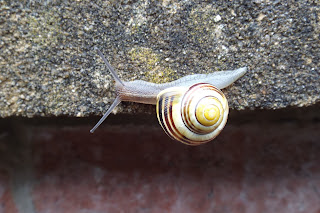 And whether describing the micro or the macro, his poetic lens brings a sense of place and industrial history sharply into focus

Clackenthorpe
To the farms and neighbouring hills
ascends all day the sound of mills,
a distant noisy thud, resembling
a massive metal jelly, trembling.
In the valleys of the moors
wherever copious water pours,
sprawl with mill-sheds, black and dull
the towns that rose and thrive by wool,
industrial villages that lie
9 months beneath a drizzling sky.
Behind, the grim black moorlands, close
like a world's end where no road goes,
where Romans whistled in their day,
now in the wind wail spectral choirs
from the bare poles' singing wires,
a lonely file they kept before
sinking into every moor. 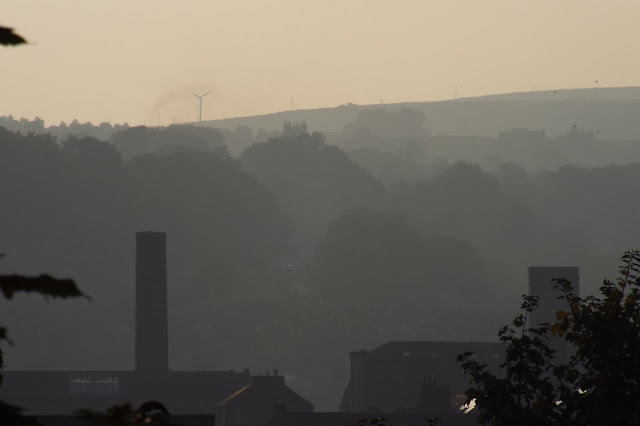 Elsewhere, the influence of Coleridge is apparent:

While the frost works silently
its cold and glittering artistry
and icicles shine thin and bright,
long thawing through the silent night. 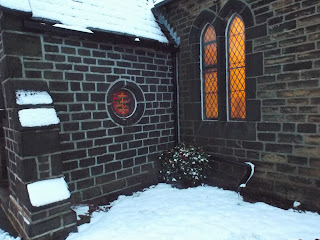 ...and at times, one feels a sense of pure, lyrical delight, bringing beauty to the bleakest of landscapes:

A sky of hyacnthine frost
where, a feeble daytime ghost,
the moon's faint orb lurks dully white.
The frozen moor, in waning light,
lonely and dead on either hand,
appears more like a sea than land,
bounded by the vast bare sky.
On earth's dark breast the snowflakes lie
fresh fallen, new and cold with light
speckling the hills where hangs the light 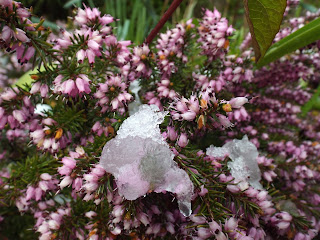 In one of Moor's most powerful poems, a dad and lad set out one winter dawn to walk across the outskirts of Wigan. The poem, with its unsentimental depictions of a working class neighbourhood, reads at times more like a work of skillfully descriptive prose:

There was no-one in the street as they closed the door of the little house
among all the other little houses set in two rows,
looking strangely pathetic as the dawn light numbly shone in the knocker
and dappled with rose and apple the window, the curtain closed.

As the pair continue, we are given a glimpse of the escapism conjured up by the sight of railway lines, as The rails led flashingly into unknown free land. 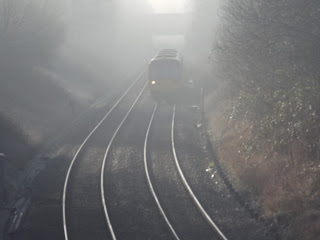 From a high vantage point, and in this poetic spirit of escape, the town of Wigan its self is seen through slightly awe-struck eyes, and in terms which lend a magical sparkle to items of everyday domesticity:

A low plain of roofs and spires
with the grey honey-hued coolers
rising like gigantic milk bottles.
As the dawn sky frostily shone and melted a million colours,
only one chimney wavering white smoke that trailed and thinned away over the moors,
seeming so real in the thin crystal light of the morning,
grey blue flashes where the mines had sunken of old,
and the earth was exhausted and sagging like a cake that had not come right.

It is like a child's view of a decrepit landscape, something DH Lawrence might have written in a light mood, where even the town's tiredness and industrial decay is lit by humour and an unexpected beauty.
This sense of wonder only grows, as further out into the country, and watches birds flying over a reservoir:

This dreamlike peace is shattered when the reason for the excursion is made clear.  One by one, the father dispatches several birds, his gunshots echoing across the surrounding countryside.  Father and son take the long walk back home, and, in a bleak inversion of Seamus Heaney's 1966 poem Death of a Naturalist, his infant innocence is tarnished by the touch of the dead birds' loose, rubber-like necks.  For Heaney, his coming of age was triggered by an intimate experience of encountering nature; Moor's young subject feels his world turned upside down by the bruising realization of man's impact.  The reality of this avian death colours not only the child's consciousness of the non-human world, but of the world its self.  The sad, newly useless bodies flap in the bag over his shoulder:

twisted and unlovely, like all things,
the smoking factories,
the crippled streets,
their street, too, as they came up,
it seemed small and hateful. 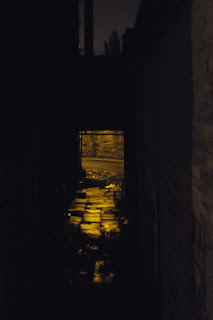 Such is the forgotten poetry of George Moor, a man whose literary legacy is as dim-remembered as the long-lost neighbourhoods whose lonely songs he wove upon the Northern melodies of his sad, lyrical verses, and whose life remains largely a mystery even in the towns and villages where he lived and wrote.


Posted by Caterpillar Poetry at 00:02