Carving Angels in the Window Pane - Poetry by Keely Murphy 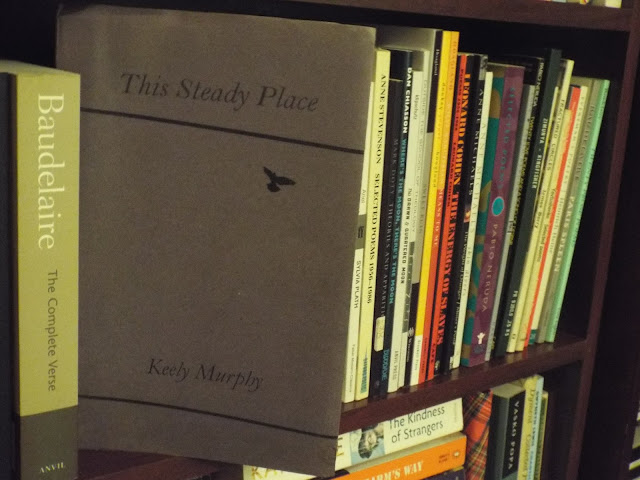 I know little of American poet Keely Murphy, beyond that her collection This Steady Place (Blue Begonia Press 2005) is one of my favourite books, sent to me by a friend from the publisher's home state of Yakima, Washington, nearly ten years ago.  The biographical information records that the author lives in the Yakima Valley, "one block away from the centre of the city," but there is no suggestion of any other publications. The poet's persona is as enigmatic as many of the presences which sail fleetingly through this magical book.  I dreamt ghosts carved an angel in my window pane, begins one of the poems in this shimmering collection, all shattery, haunting my apartment building. 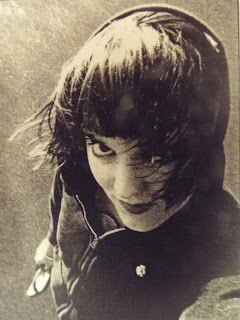 Dreams feature significantly, as do the beginnings of days, the act of waking, though often with the sense of something more elegiac than Edenic:

A hush fell over the city today.
I crossed Yakima Avenue and felt and
heard the same hush on 40th Avenue.
We drove downtown and this
sea of birds flew up from the old buildings,
all curving in a crowd, darting, spotting the sky.
Dark against a gray sky lit up by sunset. 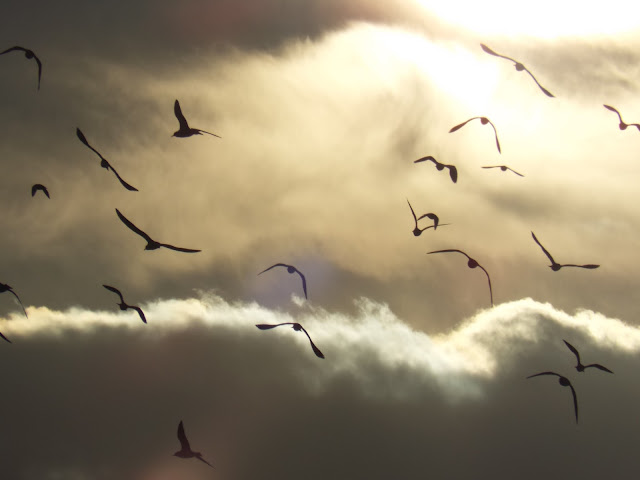 Birds flutter and swoop through the beguiling pages of this day-dreamy book, winging their way into the title poem, where the book's valley setting is my quiet strength, like bone destiny.  Setting out her declaration of intent, the poet states:

Today, I don't need sand dollars.
I need this sun, this March heat, these white cumulus clouds.
And I will continue as this desert does, bending seasons,
dry and wet, cold and warm, and
this inconsistency its own reliability. 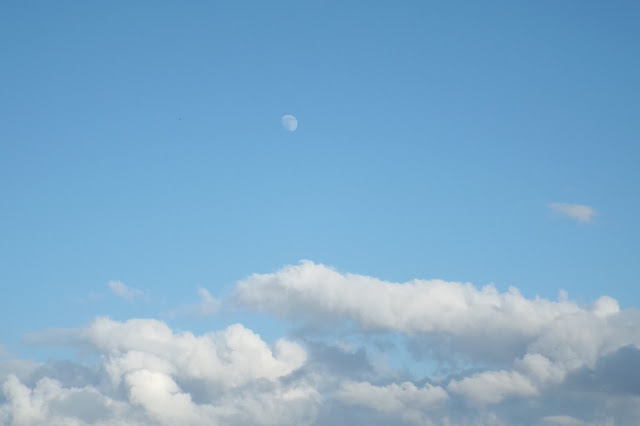 Deep in a meditative communion with her surroundings, the author celebrates the valley's powers in a a Pantheistic joint embodiment:

I wake up just how this valley does.
It got into me as a child. It raised me up as a woman.
Its cycles are my cycles, and I am its own.
This dusty ground, accepting what we give it.
I accept this long way around.
I love it here - these chimneys and porchlights.
This steady place.  It is broken and blown over.
It is blooming and full of birds.

Reading these lyrical, quasi-Biblical lines, which so eloquently portray the cloudy heat of late winter in the Pacific Northwest, in the grip of a Calder Valley winter, it is hard not to notice both the vast differences and similarities between our two environments.  Here, there are no irrigation sprinklers to overwhelm any miraculous crop harvest.  No cherry blossoms, desert dust, or lawns being mowed - even by March.  But the horizons are defined by bulbous brown hills rising into clouds, and the ground we walk on is built over minerals thick and cold, while the Calder Valley winter is a glittering symphony of birds  - waders, ravens, wrens and woodpeckers, muscovies and merlins.
Keely Murphy's descriptions of pigeons strike a chord for me, as they are birds of abundance here in my neck of the woods:

Farther down the avenue, pigons flew
up from the old Baptist church and
one white bird landed on the east side
perched on a tiny stone ledge. I said,
"Look at that white one." 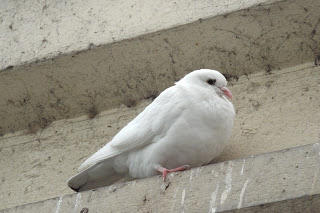 I love how the poet imagines the pigeons' relations elsewhere in the world: 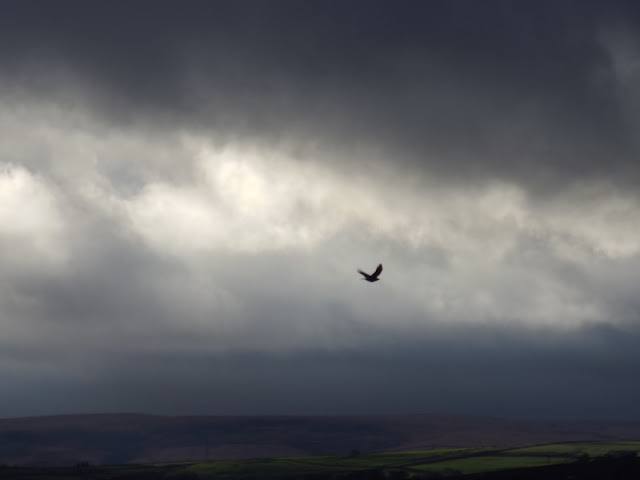 But the birds flocking through the poems in This Steady Place are as likely to be mythical or imaginary as real:

In a dream last night I dreamt
I was sitting next to this young Asian man,
overlooking the water when
a tremendous flock of birds flew up
dotting the entire pink sunset sky, end to end.
And as I gasped and told him how beautiful it was
he told me that sometimes when that happens
he tries to read what it says like text,
black letters dotting the page.
And I wondered what it would say
if you froze the there-
all of their wingtips touching
discovering the shapes. 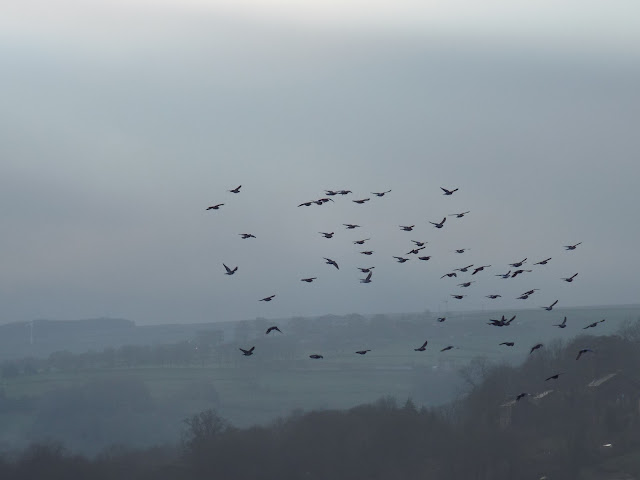 What the poet has done here ties in greatly with one of my own current obsessions - the poem as dream, or the dream as poem - but in a manner so elegant and fluent as to create the impression of a realistic dialogue. I can see and hear the Asian man, the birds, the black letters of their wings dotting the page of a Pacific sky.  It is this acute skill of depicting characters which also brings to life the more conversational or human-focused poems in the collection, as in apparently autobiographical sketches such as Honey Cigars and Wine:

We stand there as Murphys.
We are everything my parents thought would never happen.
My brother, a desperate eighteen year old,
swallowed up by love,
emotional, transitory, troubled, and full of music.
Smoking cigars desperately.
My sister, a married purple-teeth-stained patchouli girl
who wants to fight and wants to be loved, equally.
Me, a color-driven poet, pierced and full of words.

The poet's family appear also in the gentler Honeysuckles, where she recalls The honeysuckle days of childhood  /tangled up in gray woody trees, and remembers warmly:

These are my best moments,
held up in live wood.
Fresh honeysuckle still in my mouth.

Going on to idealize the setting, while also hunting at hidden pains beneath the bucolic exterior:

Elsewhere, the concept of sharing, of bridging the divide between two people by a joint experience of "opening up", is given unexpectedly pictorial, stunningly metaphorically effective treatment:

we opened ourselves,
opened beautifully in a few moments.
Raw right and left ventricles, red chambers, open.
We don't have solutions or remedies.

This Steady Place is a quietly enchanted, nostalgic, at times dark, often warm and sometimes funny book, split into three sections - the first being mainly recollections from the poet (or narrators) interlinked with dialogue, the innocence of garden and rural scenes mingling with the corrupting, and magnetizing delights of the city; the second a descent (or ascent) into spiritual settings, with the concluding third veering into surrealism.  Some of the titles of the poems in this third part are enticingly bizarre:  I Woke Up With a Mouth Full of God; and my favourite, My Mother's Unwritten Poems, while the poems themselves often begin with dazzlingly strange images:
I want to tape leaves to my eyelids

I am walking up and down the crucifix

A poem starts as an ache

There is uniquely crafted, bewitching poetry of love and loss, poetry of memory and of dreams, poetry of bridges, breaking hearts, city streets and spray-painted angels, and poetry that deserves to be read far beyond the poet's native Yakima, as far and widely as possible.  Indeed, one of the book's most arresting images comes, for me, in the short poem Prayer, which opens up its second, more spiritual or philosophical section, and which is arguably even more relevant at the onset of 2018 than when first published 13 years ago. The poet combines images of prayer in valleys beyond her own.  In Jerusalem they are praying, she tells us, while in China their prayer flags blow / and spin.  Just as at other points in the book her weaving together of valley after valley after valley depicts a multi-faceted web of shared existences, so this poem's deft depictions of cultures thousands of miles apart somehow transcend the barriers of space and time and bring into focus the bonds of a shared humanity and planet.  Reading it overlooking the woodlands, villages, towns and lives intersecting and evolving in my own valley, I am struck by the poem's simple beauty, and its urgent, unaffected truth. 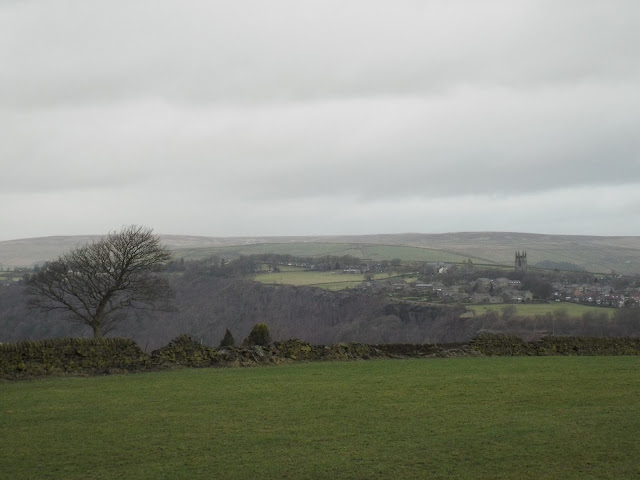 Posted by Caterpillar Poetry at 22:25