Shivering Slightly - The Moon in Poems by Sidney, Wordsworth and Larkin 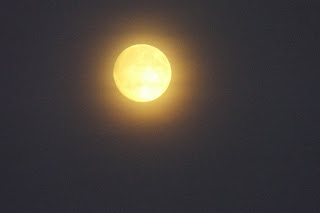 Philip Larkin's poem Sad Steps was published in his 1974 collection High Windows, but its theme - and title - were drawn from much earlier roots.  In Sad Steps, Larkin specifically references two poems, of the Sixteenth and Nineteenth Centuries,one by Philip Sidney, the other by William Wordsworth.  I want to look at how Larkin neatly samples both the language and the themes of the preceding poems, and creates with his contribution both a compliment and a riposte to both.

With how sad steps, O Moon, thou climb'st the skies!  begins Sir Philip Sidney's address to the moon, published in 1591,  How silently, and with how wan a face! 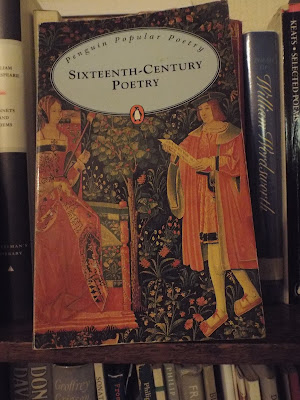 Sidney's lines are taken from Astrophil and Stella, a sequence of sonnets in Petrarchan style.  The title is taken from the Greek - "Astro" for star, and "Phil" for lover, thus Astrophil is the star lover, and Stella is his "star."  Sidney's sonnets are melancholy and at times self-pitiful, as in the lunar lines, where the poet claims an empathy with his celestial addressee:

thou feel'st a lover's case,
I read it in thy looks: thy languish'd grace,
To me, that feel the like, thy state descries.

O Moon, tell me,
Is constant love deem'd there but want of wit?
Are beauties there as proud as here they be?

Sidney - or rather Astrophil (scholars generally agree that the persona is distinct from the poet, and not an alter-ego) - lapses into moralistic judgement, asking the lovelorn moon whether even in heav'nly place those who are loved scorn whom that love doth possess? and implying that the object of his unrequited affections is guilty of ingratitude:


Do they call 'virtue' there ungratefulness.

To be honest, I don't particularly like the poem, and find its narrator's self importance pompous and embarrassing, like the priggishness of a workplace pest who cannot understand how his romantic overtures or sexual advances would be met with anything other than reciprocation, a man who thinks that he is "God's Gift to Women," as the saying used to go.  And yet, there is a certain pained brusqueness in his barbed closing lines which smacks of the spurned grouch, too far down the road of disappointment to really care what others think of his petulant wit, which in later centuries could almost spring from the curled lip of a Tony Hancock, or indeed a Philip Larkin, which I do find drags me back into the fold of the poem's admirers, if reluctantly.

With how sad steps, O Moon, thou climb'st the skies!
How silently, and with how wan a face!
What, may it be that even in heav'nly place
That busy archer his sharp arrows tries?
Sure, if that long-with-love-acquainted eyes
Can judge of love, thou feel'st a lover's case,
I read it in thy looks: thy languish'd grace,
To me, that feel the like, thy state descries.
Then, ev'n of fellowship, O Moon, tell me,
Is constant love deem'd there but want of wit?
Are beauties there as proud as here they be?
Do they above love to be lov'd, and yet
Those lovers scorn whom that love doth possess?
Do they call 'virtue' there ungratefulness?

The poem is written in a tone in which Larkin would also pay homage to the moon, but in a different, deeper, and more self-reflective way - but is far different from the style of its next incantation. 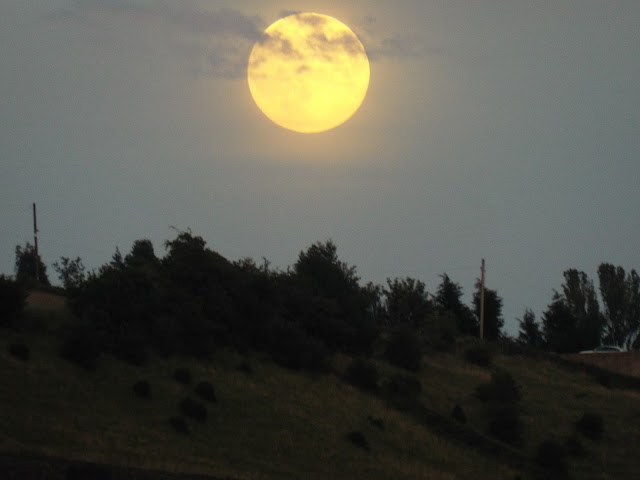 When Wordsworth wrote his sonnet inspired by the poem in 1815, it was the moon's magical allure that he embraced, with characteristic romance.  Maintaining the opening feel of the original, he also begins with a question:

With how sad steps, O Moon, thou climb'st the sky,
"How silently, and with how wan a face!"
Where art thou? 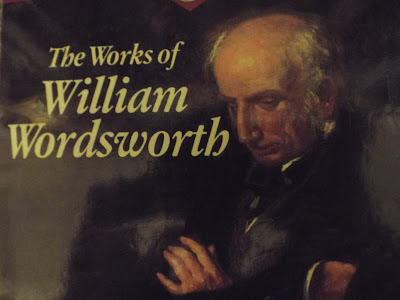 Wordsworth's poem, though, soon departs from Sidney's sense of disenchantment.  The only concession to earthly concerns is an unusual comparison:

Unhappy Nuns, whose common breath's a sigh
Which they would stifle, move at such a pace!

And at the half way juncture, we are indulged in the stuff of myth and magic:

The power of Merlin, Goddess! this should be:
And all the stars, fast as the clouds were riven,
Should sally forth, to keep thee company,
Hurrying and sparkling through the clear blue heaven. 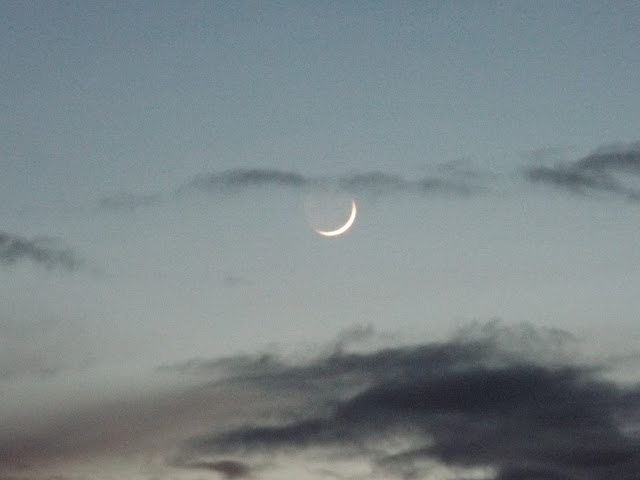 Wordsworth invokes the lunar goddess Cynthia, an epithet of the Greek Artemis, born on Mount Cynthus, and synonymous with Selene and the Roman goddess Diana.  Wordsworth's lines are slightly reminiscent with those of Ben Jonson, whose 1601 play Cynthia's Revels contain a lovely paean to the goddess:

Earth, let not thy envious shade
Dare itself to interpose;
Cynthia's shining orb was made
Heaven to clear when day did close:
Bless us then with wishèd sight,
Goddess excellently bright.

In Wordsworth's sonnet, the majesty of moonlight is given the full vent of the author's celebration, with no attempt at linguistic self-restraint.   It is a poem devoid of irony, which both centres on the sadness of the moon's retreating image, and the elaborate imaginings of the poet

With how sad steps, O Moon, thou climb'st the sky,
"How silently, and with how wan a face!"
Where art thou? Thou so often seen on high
Running among the clouds a Wood-nymph's race!
Unhappy Nuns, whose common breath's a sigh
Which they would stifle, move at such a pace!
The northern Wind, to call thee to the chase,
Must blow to-night his bugle horn. Had I
The power of Merlin, Goddess! this should be:
And all the stars, fast as the clouds were riven,
Should sally forth, to keep thee company,
Hurrying and sparkling through the clear blue heaven.
But, Cynthia! should to thee the palm be given,
Queen both for beauty and for majesty. 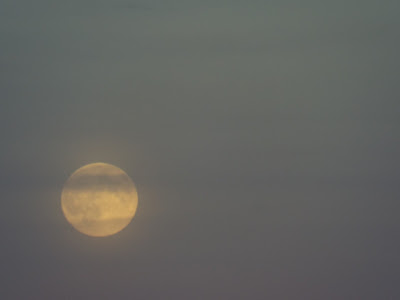 Philip Larkin's Sad Steps was written in 1968, and would be included in the author's final book of poems six years later. It is a fine example of the sort of poetry which defines "Late Larkin," and the scholar John Welford credited the poem as setting out an impression of beauty being observed yet stripped of its traditional connotations. 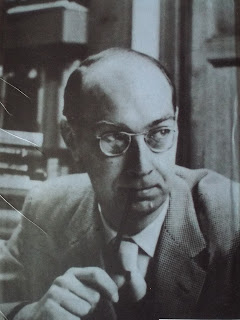 Sad Steps, though obviously taking its title from the previous two poems, could hardly be more different in its opening lines:

Groping back to bed after a piss
I part thick curtains, and am startled by
The rapid clouds, the moon's cleanliness.

It is classic Larkin, though the curtness and apparent casualness of the scene serves a purpose beyond dour humour.  Typically, most people focus on the word at the end of the first line, but I would suggest that the first word, "Groping" is, if anything, even more of a powerful kick in the teeth to the poem's illustrious lineage.  Rather than its association with unwanted sexual advances, "groping" as written in 1970's England would conjure images of a weary, half-blind old an stumbling through the dark. It is a clumsy, cantankerous, loveable image - again the thought of Hancockian comedy springs to mind, and I picture a Rupert Rigsby or Alf Garnett, or even an out-of-sorts Kenneth Williams, perhaps clinging to the banister or reaching out with uncertain arms for the bedroom door. Like a kitchen sink comedian, Larkin commences his meditation on the moon by ushering in an image of the everyday, transposing Sidney's and Wordsworth's "Medallion of art" onto a distinctly unromantic setting with which his 20th Century readers might easily identify, lacking any references to Classical mythology or Heavenly figures. To those familiar with the titular significance, the opening line serves as a brusque dismissal of a less cynical past, and does so with a certain black humour.  When I first read the poem at the age of sixteen, I had no idea of its roots in Sidney or Wordsworth, and rather assumed that the sad steps referred to where those of the narrator.  Either way, Larkin sets the scene of a man standing at a window in the middle of the night.  One shivers slightly, looking up there, he tells us, and he could be a man on the deck of a ship, on a scaffold, at the edge of a bridge. It is an image he refines to dark perfection in poems like High Windows, full of pathos and foreboding - a man taking stock of his life, of the years he cannot reclaim, of the unknown still to come. 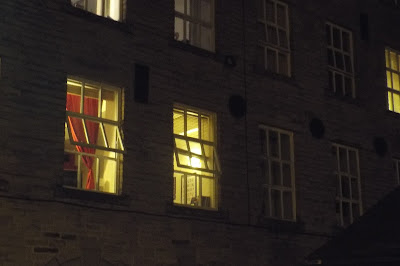 Larkin was in his early forties when he wrote the poem, and rather than mocking the grandiosity of his forerunners, it is to his own reflections that he is prompted by watching Stone-coloured light sharpening the roofs below. In pondering these reflections, though, he is not without humour:

There's something laughable about this
The way the moon dashes through clouds that blow
Loosely as cannon-smoke.

Nor does Larkin ignore the fantastical allusions others might draw from an unexpected lunar interlude, suggesting associations with werewolves, describing the moon as a Lozenge of Love, and letting us dwell for a moment on its separate immensity.  The impact, then, of his terse, monosyllabic refutation - No - reads both abruptly, and with a certain reflective length.  It feels as if we are there with Larkin, standing by the parted curtains, and we can trace the thought process of the poem from its genesis by the window, presumably through the groping walk back to bed, as the gradual realizations form in the mind.  The poem brings Sidney's imagery full circle, touching on the drama and passion of the Wordsworth variation, and homing in on that same sense of resignation, or is it middle-aged fear and anxiety, which taints the original in its sour sadness.  Unlike Sidney, Larkin is reflecting from an older perspective, but like the former he is engaged on a summing up of something unrealized, and at the end of its useful course.  Yet the poem is also a cautionary tale, urging us to to grasp the reality and sharpness of the moment. For Philip Sidney, the moon offers empathy and solace against a background of thwarted young love, an unrequited romance from which the young narrator is bound to recover and strike out afresh. For Larkin, it is a symbol of a past beyond reach, but, as he acknowledges, also the circle of existence, a chain in which all the strength and pain of being young is passed on to another generation.  As such, Larkin's angle on the subject is inconclusive, and interpretative.  The moon, which alone stands firm while he, the human, ages, symbolizes the impenetrable mysteries of the Universe, and the insignificance of all of life's dramas and triumphs in the passing of time.


Groping back to bed after a piss
I part thick curtains, and am startled by
The rapid clouds, the moon's cleanliness

Four o'clock: wedge-shadowed gardens lie
Under a cavernous, a wind-picked sky.
There's something laughable about this,

High and preposterous and separate -
Lozenge of love!  Medallion of art!
O wolves of memory!  Immensements!  No,

One shivers slightly, looking up there.
The hardness and brightness and the plain
Far-reaching singleness of that wide stare

Is a reminder of the strength and pain
Of being young; that it can't come again,
But is for others undiminished somewhere. 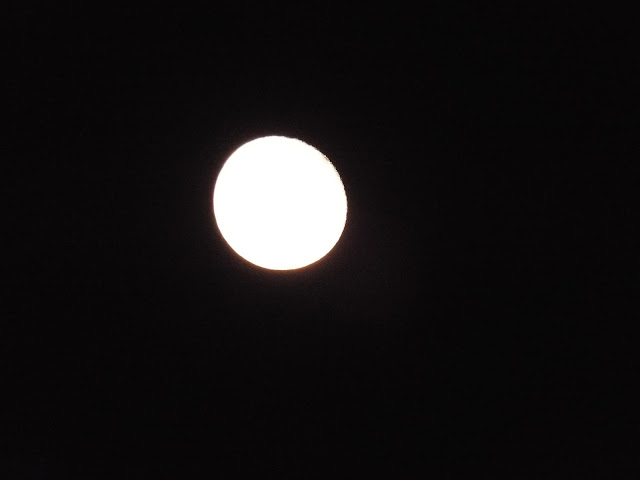 Posted by Caterpillar Poetry at 23:54