Sticky Pearls - Why Earthworms are Important

STICKY PEARLS - WHY EARTHWORMS ARE IMPORTANT

“It may be doubted whether there are many other animals which have played so important a part in the history of the world as these lowly organised creatures.”Charles Darwin, The Formation of Vegetable Mould Through the Action of Worms, With Observations on Their Habits, 1881. 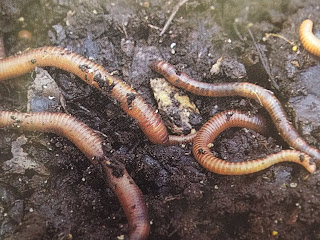 Synonymous with death, worms gradually devour the bodies of the dead, provide an ironic twist to the food chain, thrive on carrion.  Let’s talk of graves, of worms and epitaphs, Shakespeare’s Richard the 2nd grimly urges in the midst of war. Hamlet, musing on mortality, observes how humankind might fatten and consume other creatures only to end as the food of worms.  Your worm, he tells us, is the only emperor in diet.

For William Blake, the worm  represents corruption, something dissolute and nullifying.  In The Sick Rose, though his worm is metaphorical - no earthworm would fly, by night or any other time! - he nonetheless selects this species to destroy the rose with his dark secret love.

Sylvia Plath at least pours some balm on the depiction of worms, comparing them to sticky pearls, yet this description comes in the context of death: the worms have gathered on the body of the briefly expired Lazarus, imagined in female form.  Worms appear again, in The Fearful, this time more ambiguously referenced:


This man makes a pseudonym
And crawls behind it like a worm…
The mask increases, eats the worm…
worms in the glottal stops.


In the poem, death is mentioned three times.


Earthworms have wound their way into my own poetry. In my debut collection Little Creatures: Poetry of Insects, Small Mammals and Micro-organisms, I tried to shed light on the wonders of the worm, yet, motivated by Blake, have inevitably veered towards its darker nature:

To rake the muck,
sift silt, and crawl mud-miles,
slurping sods awash with phosphate,
like rubbery trowels, creeping
through a jungle of bacteria,
these are the virtues of the worm.

Amazingly, this boneless wire can regenerate,
a resurrected miracle
as twin lives germinate.
This is the wonder of the worm
his brute adaptability, and love
of all things life-giving,
his quest to poke himself into the open
at the brilliant incision of jawbones -
badger’s staple, blackbird’s catch.

Disturbed in earth
a parody of exile
braving
hard necrotic
frosts and re-submerging
ostrich-like, at the sheer
invasive skim of metal.

In a dark oblivious
universe of loneliness,
worms mine alkaline
and acid, burrowing
to the soil's blood.

on the crimson joys
of bursting birth,
consuming death:
teeth pinned on roots,
like embryonic babies
whose intestines slowly grow
and coil themselves
into life. 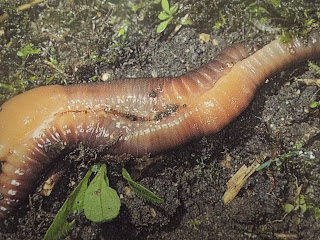 Throughout literature and mythology, worms have served, engagingly, as reminders of the morbid and macabre.  Vikings pictured them coiled around the Universe, biding their time before strangling the world; Norse legends filtered into the folklore of areas that fell to Viking plunder, so that in the North East, for instance, “The Worm’s Den” is a secret hollow inhabited by The Linton Worm, a serpent who nocturnally emerges to gobble crops and livestock.  Innumerable similar legends abound.  In reality, worms are neither monstrous or dangerous.  Indeed, it is hard to see how the earthworm, an umbrella bracket for an internationally profuse distribution of species of which six occur in Britain, could be seen to do anything but good.

Breathing through their skin, worms live principally below ground (the layer of earth they naturally occupy is known as “the drilosphere,”) and as they move in search of food, they aerate and break it up, easing access for roots, aiding drainage and nutrient access for roots.  They also consume soil and organic matter, excreting soluble, pH balanced nutrient-rich "casts" taken up by roots, and play a vital part in the ecosystem as prey for other animals such as birds.  They can number up to around 3 million per hectare in productive pasture, and live around ten years.  Worms interact symbiotically with bacteria, soil fungi and other organisms which form associations with plants, benefiting worms, which in turn benefit us all.  Yet these facts, seemingly self-evident today, were largely unknown until just over a century ago. 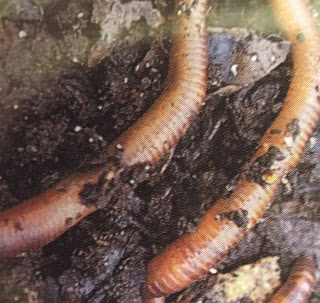 A young Charles Darwin took pains to observe earthworms in their natural environment, and returned to his youthful fascination a few years after On The Origin of Species.  This time, he performed experiments, and recorded the results.  Convinced that their turning of the soil and periodic appearances above ground must serve some beneficial purpose(s), he deposited chalk and coal stones in a field, returning to them twenty years later to assess the depths to which they had sunk, thanks to the actions of the earthworms.  At Stonehenge, he noted sunken monoliths absorbed into the Earth via the impact of earthworm castings.  Darwin received help from relatives, letters of advice from as far-a-field as India, and even soil samples from the sites of Roman ruins.

It will be difficult to deny the probability, Darwin wrote, that every particle of earth forming the bed from which . . . old pasture land springs has passed through the intestines of worms. His research exploded the myth that worms were essentially pests, and the resulting book actually sold more copies in the author’s life time than the famous  ...Species - with a thousand copies purchased in its first few weeks of publication.  It was to be the author’s last - Darwin died the following year at the age of seventy-three.

Thanks to Darwin, the earthworm’s virtuoso role in the environment is well known and respected.  Far from being an unwelcome guest, the worm is integral to the health of our planet.  It is a great performer of aeration and soil management, and in its own peculiar, surreptitious way, a very interesting animal, like a wriggling mole, a subterranean smuggler dispensing innumerable nutrients, and in its humble, understated manner, cementing the mechanics of the soil into a functioning whole.  Without worms our eco-system would be fatally imperiled.  Or, as Darwin put it, Without the work of this humble creature, who knows nothing of the benefits he confers upon mankind, agriculture, as we know it, would be very difficult, if not wholly impossible.

Posted by Caterpillar Poetry at 16:55