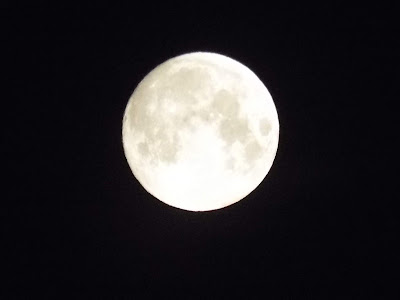 We have lately been blessed by some stunning moons, luring my focus to the lunar. I've produced a fair few Octolunes*, and as usual am unsure quite what to do with them.  Since inventing the form in December 2014, I have chalked up several hundred, and, as readers of these pages will know, others have taken up the baton from time to time as well.  I'm still hoping to launch some Octolune events, workshops, and collaborative pamphlets, as well as publishing some collections of my own - and from time to time Octolunes find their ways into regular collections - but the truth is I now have so many of them on my hands that they are running riot, and short of devoting an entire website to their publication, the most sensible thing seems to be to feed a few in periodic posts, starting with these, a few of my most recent.

*8-line verse form, addressed to the moon, in which the opening word is always "Moon."  That's it!

Moon,
astro-tycoon, like a sky-bound rune,
you're a lunar balloon over lakes and lagoons,
baboons, racoons, and protozoons,
from Rangoon to Cameroon,
to the dunes of Saskatoon.
I've written a poem about the moon
without once even thinking of mentioning June.

Moon,
you rise in skies
like a slimy eye's
reflected twinkle.
Your distance belies
your actual size
as you crystallize, a crescent kinkle
like a glittery Rip Van Winkle.

Moon,
permafrost pearl,
hinterland's glim,
Pre-Raphaelite ferris wheel,
like a frozen ocean, condensed
into a skull-like phial,
like a shrunken Jupiter
you seethe.

Moon,
inflated raindrop,
atop the dripping treetops,
crescented, a haloed halebopp
gloppy fop, your astral hop's
a crinkled cough-drop,
soothing the sunburnt throat of space
like a snowy glottal stop.

Moon,
in  crescent jest
you wince,
silver-lipped,
like a quartered quince
slicing sky's blackness
in an icy stripe
of plucky light.

Moon,
soapsud moon
who, like a sheen of silky sherbet
sprinkles silver showers of icy light,
you bask,
illuminated lunar beauty,
against the licorice black
of frozen night. 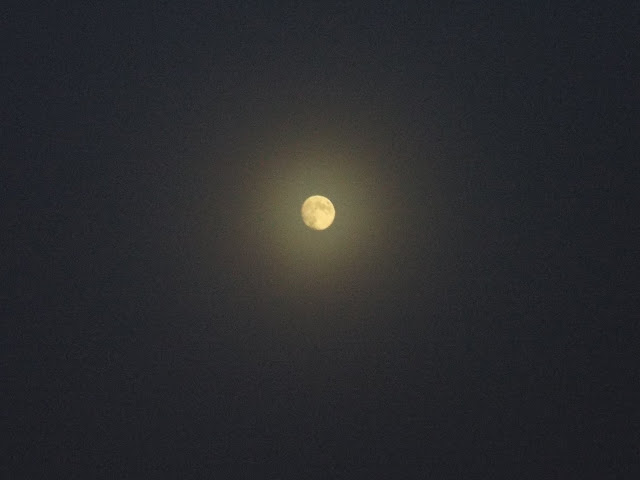 Posted by Caterpillar Poetry at 12:39