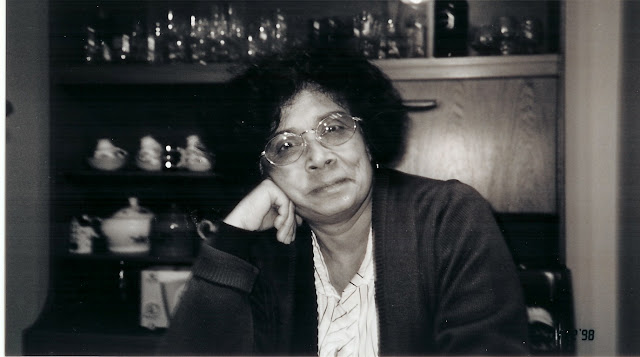 This autumn will mark seventeen years since I first discovered the poetry of Ashoka Sen, in The Redbeck Anthology of British South Asian Poetry.  I have always been struck by the profound evocations of emotion in her work, framed by a sometimes minimalist, yet fluent, use of language which lends the poems a narrative feel.  In fact, I often reach the end of one of Ashoka's poems feeling as if I have just read story, or sat through an engaging film.  They pack so much detail, so much feeling, so much life, into their neat stanzas that, reading them, one cannot but rejoice in the discovery of a new perception of the world, seen through the eyes of this acutely observant poet. 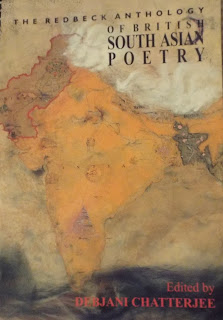 Ashoka has been writing for over twenty years. Her career highlights include:

Ashoka uses many literary forms in her writing – from flash fictions to serious novels, from non-sense rhymes to lyrics, from long narrative verses to contemplative philosophical discourses.

She enjoys writing for the children too and produces her own illustrations. I can highly recommend Ashoka's other work, including her highly distinctive paintings - and you can find out about these and more on her website http://www.ashokasen.co.uk/

I have selected a series of nine poems below, which I feel invite us to reflect on the mysteries and transience of life, the impact of humanity on the wider world, and the beauty of our planet.

I waited for you throughout the whole night.
You didn’t come.
The fainting smell of yesterday’s jasmines
hung heavy in the air.
I felt desolate.
In the morning I saw an amber bee
coming through the window.
It sat on the spray of lavender in my vase
and seemed to sing out in a humming tune
“I have come. Beloved, I have come.”
I knew at once that you’d come to me.
I saw your footprints on my doorstep.


DEATH OF A BUTTERFLY

A butterfly is trapped between the two panes
of my double-glazed window.
It knocks about desolately
within the cells of two glass-walls,
searching for a sky to take off.


At distance the August sun shimmers,
mauve clouds write on endlessly
on the slate-blue sky
a free verse,
an accolade to bohemianism.
The butterfly – dazed,
cannot rise on its wings and rejoice.


The double-glazed window stays still,
carelessly reflecting mauve clouds,
blue skies and the summer sun.
It stands cool, watching dispassionately
the death of the butterfly
in the translucence of its crystal case.


I saw dolly in the telly
with a Mona Lisa smile.
She seemed reluctant
to give out the whole truth.
Her face, semi-circled by the tresses of
newly-washed golden curls,
looked angelic.
So immaculate in her appearance,
that I couldn’t believe,
such a beautiful creature was born
not out of love,
but a device
in a laboratory.


I asked Dolly
whether she would behave like other sheep?
Rollick and frolic?
Bleat and ruminate endlessly in the meadow
interwoven with cowpats and sunshine filled buttercups?
With a Mona Lisa smile
she remained silent to all my queries.


Soon the vision changed.
News and views, catastrophes and disasters
tumbled down from the little box,
telling me all at once
that the world we live in is a dangerous place
and it needs to be corrected.

After seeing Dolly
I’m not worried any more.
I know now
ours is going o be a perfect world one day,
when there will be nothing,
but Dollies and Dollies and Dollies.
Millions and millions.
All well-shaped,
absolutely covered with clusters of glossy fleece.
There will be no whisking and frisking
and nothing politically incorrect
in that beautifully designed orphan world.


Dolly has perfected herself in her death.
All four stages of life, she has tucked in aptly
in a neat package of only six years time...
for her there’s no talk of euthanasia
or ‘waiting for Godo’.


I know now why Dolly smiled so enigmatically.


ONE HAS TO BUNCH UP ONE'S FINGERS


My child bunched up its fingers and shook them in the air.
I knew it was angry.
I tried to quell its tantrum with shower of kisses.
It was not pacified.
The bunched up fingers swayed,
raining down some cotton wool blows on my face.
I was not hurt, but amused,
wondering how my little babe, so young at age
came to know about the age-old truth
that when all words of anger fail,
one has to bunch up one’s fingers.

As I look out through the net curtain,
The world, outside my window, moves away from me
And crosses the bridge, beyond the border.

The bridge, beyond the border,

Where reality breaks down
and dissolves into the haze of bluebell-mists,
slowly melts away from my vision.
I look on, mesmerized, at the vanishing world.


Light filters through the windowpane
and prints the delicate pattern of the net curtain
on my face and all over my body like henna-paintings.
I cross the bridge, beyond the border.


The bridge, beyond the border,
where reality breaks down
and dissolves into the haze of twilight-mists,
crumbles away slowly, brick by brick.
Dispersed and diffused I drift off to another world.


The net curtain moves in the wind
partly revealing the world
blazing away in the midday sun
outside the latticed window.
She calls me, draws me closer.
The pull, I cannot ignore.
I push the curtain aside,
cross the bridge,
come down to the garden to meet her.

A white peacock is dancing.

the earth breathes in repose.

A feather drops off from his plumage

I lie sleepless in my bed,

trading gently outside my window.

The long luminous train trails behind

on the edges of the grass lawn.


THE ANGER OF MOLECULES


The molecules are dancing from infinite to infinity.
They waltz round step by step.
Their little feet rise and fall in rhythm.
And as they keep on trading and whirling,
the universe unfolds from becoming to being.
The molecules are weeping in pity and anguish.
The man of wisdom has snapped the bond,
letting them loose off the chain of rhythm,
keeping them split up in cruel joy,
into atoms, electrons and protons.

Dispersed from the chain they swish in anger.
The towering mushroom of their vengeful thrust
haunts the children of Hiroshima-Nagasaki,
blasting and mutilating all love and pity.
In the desert of Nevada and beaches of pacific
they rampage and smoulder in frenzied fury.
The tears of molecules seem to congeal,
threatening to halt the process of creation.
The universe rolls back to its chaotic state,
lost and sedated in dismal confusion.

Frosts settle thickly on the charcoaled body
of our emerald earth like a dreadful shroud.
And snow-clouds gather on the horizon,
prophesying an everlasting winter.


THE KINGFISHER DOES NOT COME ANY MORE

I remember the bird kingfisher.
It used to come alone quietly.
Perched on a branch, hanging over the river water,
it would wait patiently in silence with eager expectations –
expectations for an union with its otherness.
With its head down and eyes fixed onto the brightly coloured image,
floating in the shimmering of the silvery water,
it‘d remained still, holding itself in readiness for the great moment,
oblivious of the world outside.


Then suddenly it swooped down and hit hard,
with its sword like long sharp beak,
upon the smooth surface of the glassy water..
The mirror cracked, the image shattered.
Its narcissus eyes, though saddened and disillusioned,
were quickened sharply at once by the sight of a swarm of silver fish
flickering in the vortex of the chaos.
In an instant the pang of yearning for its other self
was forgotten and its many coloured body was tensed.
The primordial instinct of hunger pounced upon it fiercely,
baring all its teeth and nails.
With its sharp beak it harpooned the silver body of a wayward fish
and then flew away homeward to its nest.
Its peacock-blue plumage glistened in the sun.
The wind played violin upon the water plants.


The kingfisher does not come anymore to the woodland
in search of its other self nor does it come
for the hunger-inducing sight of the silver fish.
The old water course does not flow any more
scintillating the elegance of the curvature of its cut-glass body.
Now there runs a yellow river instead.
Toxic and sulphurous.
It lays on the same bed slumberous, in a state of coma.


The green foliage on its banks is stained with marks of acid rain.
Water lilies and hyacinths wither away
before they come into full bloom.
Litter of black snakes from the chimneys of mills and factories
come out crawling, wriggling their loathsome bodies.
The sky turns grey with the vapour of their poisonous breath.
In the sluggish current of the yellow stream
float away rows of dead bodies of silver fish.


The kingfisher does not come anymore.

The river was always there between us.
The rickety wooden footbridge that stood over it
Was the only meeting point.
Evening used to sit there every day,
Casting her golden net,
Waiting for us.


This is where we met one day
Unexpectedly,
Intercepting each other’s way.
Both enraptured –
As if we were in a counterpoint between
The symphony of two melodies –
Bhairabi and Purabi.


To my surprise suddenly I noticed
The river, under the bridge, had disappeared altogether.
“Where’s the river?” I whispered.
“Which river? There never was a river”,
you smiled.
“The river, under the bridge? Between you and me”?
I queried...
“That was only a dream river,” you affirmed.
“Is this bridge, we standing on, a dream-bridge too?”
I asked.
“No, it’s not a dream-bridge. It is true as you and I.”
said you.