Free Samples, a poem about my father

Two nights ago I had the pleasure of reading at an event called Turn the Page, which takes place at The Book Corner bokshop in the Piece Hall, Halifax.  It was the first poetry reading I had done in almost a year, and I couldn't have asked for a warmer audience. 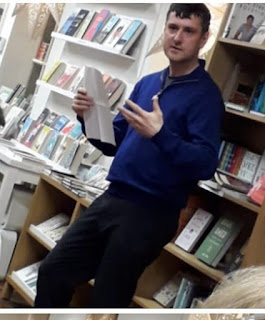 I opened with a poem about my father, a salesman, who died last year.  When I was young, he made a living selling sweets, later going into management.  He was very successful and an added bonus of the job were the many "freebies" he would bring home, especially on Friday nights when, from time to time, he would return home laden down with boxes of free samples from the various suppliers he was selling for.  Here is the poem, which I hope you like:

Often, on a Friday night,
my father brought free samples.

Bag upon bag,
tube after tube
of fizzbombs, blackjacks,
long and sticky strips of chewy tooth-rot,
sherbet dips, those necklaces
that made it feel like you were biting into stone,
candy cigarettes that minted up the mouth,
chocolates of every variety. 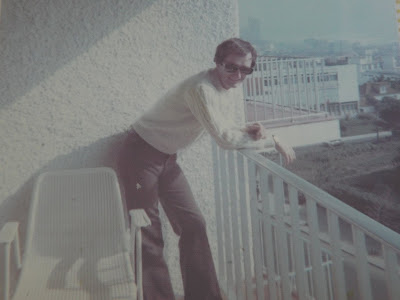 Posted by Caterpillar Poetry at 06:30 No comments:

Over the next few weeks and months I will be adding photographs and information pertaining to my recent visit to Rathfriland, Northern Ireland, where I visited the birthplace of Patrick Brontë on his birthday.  The purpose of this visit was to gather material for a series of presentations about Patrick and the family's Irish legacy, and I was delighted to meet many people with Brontë connections, including local historians, writers, and even living descendents of the Brontës.  The photograph below shows, L-R local historian Uel Wright (descendent of Dr William Wright, author of the 1893 book The Brontës in Ireland, SZ, family descendent Anne McKee (nee Brontë) and retired teacher and tour guide Kathleen McNiece. 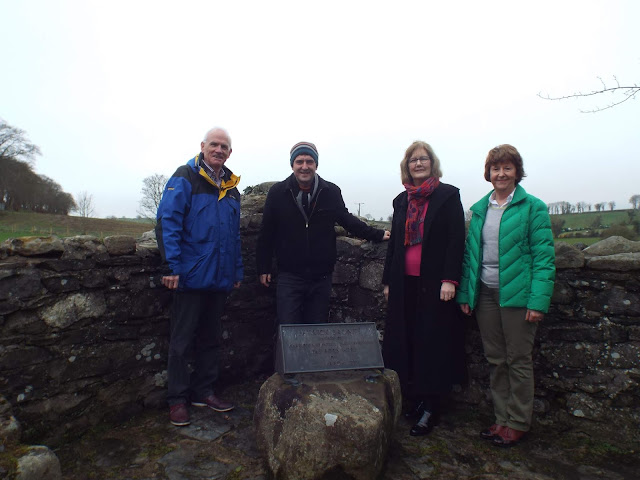 Posted by Caterpillar Poetry at 06:21 No comments:

I have been wondering recently, against a backdrop of combative public debate, in which many arguments are either increasingly hysterical or purely reliant on bland soundbites, and the way in which our social media have helped create both a climate of combustion and, paradoxically, a sort of bunker mentality whereby we can take cover within the coccoons of websites, groups and echo-chambers in which our own points of view are reiterated and our senses of identity reasurred without ever having to encounter, much less give serious consideration to, opposing or divergent schools of thought, how frequently or rarely anyone nowadays finds themselves actually changing their minds in response to an opposing point of view. And I have asked myself this question not only in relation to public issues, but to poetry as well.
We are fond of saying poetry changes things, can shift our consciousness and propel our emotions, open us up to new ideas and challenge our perceptions.  But how often have ow often have I found myself pulled up by the bootstraps by a poem, really jolted out of my comfort zone or forced to confront difficult or important messages?  In poems from Africa, from Ireland, often. In British poetry, less so.  But one such instance would be Lancashire born Pat Winslow's poem Man Carrying a Pig, inspired by the Peter Coker painting of the same name.

Now living in Oxfordshire, where she works as a writer in residence and humanist celebrant, Pat Winslow is a poet of acute attention to detail, and I find her reading her poetry rather like analysing my own conscience under a microscope.  I've written about the poem in question before, back when I first began this blog in September 2015 in fact:
http://simonzonenblickcaterpillarpoet.blogspot.com/2015/09/poetry-magazines-personal-reflection.html
but I first discovered it in the spring of 2004, between the pages of the literary journal Obsessed with Pipework.
My earlier essay describes how:

Coker's picture shows a smudge-faced man in butcher's smock, with an abnormally sized hand, trying to uphold or maybe lift a pig hanging from a hook. He is recalled in the poem by his apron glowing with blood, and the scene is compared to

the moment when a dancer

hoists his partner onto his shoulder,

this is more about him than her.


and decribes the impact of the poem as genuinely life-changing - among the main triggers for my renewed abstention from dead flesh. I stand by this description.  Although I had been a vegetarian previously, and am sure I would have made the leap back sooner or later anyway, reading this poem was more than a little influential in my thinking, and when, a year later, I took the decisive step of establishing my decision, the imagery and effect of this poem were among my foremost inspirations.

It is entirely possible that my reading of the poem is a purely personal take.  I may have interpreted something allegorical in a literal, physical way.  But should this matter? The question of authorial intentions versus the interpretation of the reader will always endure, and is no doubt the subject of another discussion, but the important thing for me in re-reading this poem, is the arresting memory of its power, and the way in which its stark, incisive writing shook me to my core, planting a seed of change. Running its unflicnhing pictures through my mind, I asked myself, do I really want to be a part of this? Its highly charged yet underplayed sense of menace, the way the poet presents a scene of severed life and blood-stained death within the elegant prism of a dance, all build to a picture of inhumanity, which ultimately contributed to my following of what I firmly believe has been a better path in life.

His apron is glowing with blood
in the half-lit shed.

Like the moment when a dancer
hoists his partner onto his shoulder,
this is more about him than her.

See how he cups the war spot turned cold
behind her left ear,how he cradles the fold

where her foreleg jerked from her ribs,
how he lifts her, how he gives
her status as he slips

her off the hook. A murderer loves his victim
eyes closed, mouth slightly open, breathing.

He coud be kissing her throat,
his lips are so close. There's a thin grout
of blood under eachnail he'll bristle out tonight.

The act will keep repeating.
He'll see her swinging, dancing.