White Hare, a poem about the moon, from a forthcoming collection

I am delighted to announce the publication of a collection of poetry, coming in early 2020, in three sections. The poems will focus on natural history and mythology, and include the piece below, originally written nearly a decade ago.  The title is taken from an Asian legend about the moon, in which it is associated with a white rabbit. The myth originated in 3rd Century BC China, with a hare as companion to the Moon Goddess.

Dim stars, scuffs of half-light
like the simmering tab-ends
of ash-fat fags
decomposing in ashtrays.

Soils vibrate with slugs, alive with hunger,
converging on gardens in the depths of dawn,
large soft eyes aglow and fixed
on leaves like compasses.
Owl sorrow pierces the silence
spread like a duvet over roofs and floodlit car-parks.

The silver gem irradiates.
Slanting streaks are couched
within a bosom of black gas.

Insanity’s insignia,
the secret sphere
which gradually comes quartering to life
orb of mountains and canals,
light-dark
ornamental as an asteroid.

You are a cleanly coloured mint
hanging beyond grasp,
a ball of ice,
a sunken cathedral
splintering like memories. 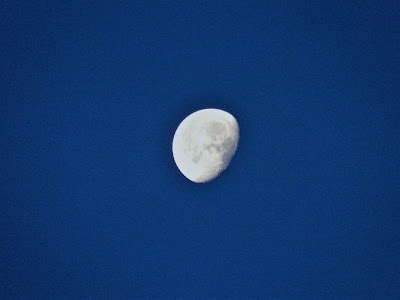 Posted by Caterpillar Poetry at 00:59